On 1 December 2017, the State Party submitted a state of conservation report, which is available at http://whc.unesco.org/en/list/419/documents/, and reports the following:

The State Party considers that a Reactive Monitoring mission was not required as the “pause” on oil exploration is still in place.

On 18 August and 20 September 2016, the World Heritage Centre transmitted to the State Party, third party information raising concerns about possible impacts from a potential hydrocarbon exploration project in the Old Harry prospect. The State Party responded on 31 March 2017 clarifying that the proposed exploratory drilling project is located approximately 200km southwest of Gros Morne National Park, and has been subject to an environmental assessment process since 2011.

The clarification on the prohibition of industrial resource extraction inside the property is welcomed, and the ongoing “pause” on hydraulic fracturing outside the property is appreciated. However, the pause does not appear to be a formal moratorium, but rather “an operational decision of the provincial Department of Natural Resources”, as stated in the 2016 Newfoundland & Labrador Hydraulic Fracturing Review Panel report.

Whilst the current “pause” on hydraulic fracturing has been effective, it would seem appropriate that more long-term substantive measures are put in place as a matter of priority to prevent future oil and gas licenses in the vicinity of the property. Recalling that the Newfoundland & Labrador Hydraulic Fracturing Review Panel report was presented in late spring 2016, clarification is needed on when a full assessment of its recommendations will be completed, and it should be ensured that the “pause” remains in place until the appropriate measures are taken, not just until the assessment of the recommendations has been completed. Therefore, it is recommended that the Committee reiterate its request to the State Party to invite a joint World Heritage Centre/IUCN Reactive Monitoring mission to the property to assess the risks to the property’s OUV of petroleum exploration in its vicinity, in case the “pause” is discontinued without putting in place appropriate measures for maintaining OUV.

The affirmation that there is no active exploratory license immediately adjacent to the property is welcomed. Nevertheless, it should be noted that any oil spills occurring southwest of the property could potentially have a negative impact due to the counter-clockwise flow of currents in the Gulf of Saint Lawrence. Therefore, potential exploratory drilling in the Old Harry prospect (License EL-1153) southwest of the property is of concern. It is furthermore of concern that a map of the Canada-Newfoundland & Labrador Offshore Petroleum Board, dated 15 January 2017, indicates that there is an active onshore-to-offshore exploration license approximately 40km southwest of the property (Lake Harbour in the Bay of Islands area; License 1120), and an active offshore exploration license about 80km away (License 1070). It is therefore recommended that in case  any licence would be awarded and activated, adequate safeguards be put in place and that the awarded licenses are preceded by rigorous Environmental Impact Assessments (EIAs), in line with IUCN’s World Heritage Advice Note on Environmental Assessment, taking into account relevant environmental factors such as flow of currents and wind regime.

Although the State Party considers that existing legislation and regulation are sufficient to provide long-term protection to the property without defining a buffer zone, the World Heritage Centre and IUCN regard the establishment of a buffer zone as a key tool to ensure that the property will not be impacted by adverse developments such as future onshore and offshore oil and gas developments. This is also in line with paragraphs 103 to 107 of the Operational Guidelines, which recall that an adequate buffer zone should be provided wherever necessary for the proper protection of the property. The State Party’s reported progress in developing measures towards formalizing protocols for interagency collaboration and developing a land-use advisory committee are certainly encouraging, but they should feed into further discussions on developing a buffer zone. It is recommended that these initiatives ensure transparent engagement and consultations with local communities and civil societies.

The consideration of the property’s OUV in the interim review of the SEA for the western portion of the Canada-Newfoundland and Labrador Offshore Area would be valuable and should be strongly encouraged. The State Party intends to include a section on OUV in the SEA of the next management plan, which is considered beneficial provided there is clarification on how this addresses the primary concern of reviewing the threats of the extractive industry and tourism development on the property. 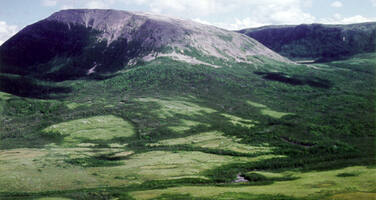