On 15 March 2017, the State Party submitted a report on the state of conservation of the property, which is available at https://whc.unesco.org/en/list/481/documents and provides information on the implementation of the previous recommendations made by the Committee (39 COM 7B.68), as follows:

Efforts undertaken by the State Party are welcomed, especially the development and adoption of a road network and management scheme, the monument zoning plan together with construction and zoning regulations, and the completion of the Champasak Cultural Landscape Master Plan.

However, the report does not provide any further response or solutions to the new constructions that were highlighted in the previous report and which cause a densification of the main monumental complex. No information was provided either on how the construction and zoning regulations will be implemented or enforced. It is also not clear from the report whether tangible progress has been made with implementing the provisions of the Management Plan and the monitoring framework. It is recommended that the Committee request the State Party to finalize the Management Plan, as a matter of priority, and to provide a final draft to the World Heritage Centre, for review by the Advisory Bodies.

The Lao Government has addressed the recommendations of the previous Reactive Monitoring mission and the Committee’s requests by incorporating the road network and traffic management scheme into the final version of the Master Plan. Progress on its implementation should be monitored and reported to the World Heritage Committee.

The tightening of the development control system, which should be undertaken before Route 14A is reopened to traffic and which shall prevent new construction along the section of Route 14A from km29 to km34, has been incorporated into the revised Building Code and other regulations included as Annexes 2 and 3 of the Master Plan. It is recommended that the Committee be kept informed whether the revised regulations are enforced effectively or not.

A new landscape study of the area of the monument was undertaken in 2016, resulting in a new Monument Zone Plan. The Master Plan was developed using a landscape approach, as requested, in which the physical attributes justifying the OUV were re-considered. Inter-agency coordination and cooperation is explained in the Master Plan and appears to work satisfactorily, yet progress and effectiveness should be monitored.

The need for meaningful dialogue with villages within the property through an awareness-raising program for residents and consultation with the concerned villages, is addressed in the Master Plan in relation to the establishment of control for urban development. The production of simplified documents for the use of residents appears to be very top-down process, rather than a two-way consultation. Nevertheless, the Management Plan does recognize that “protecting and managing the development of the classified site is largely based on this distribution [of simplified documents] and on dialogue with the local population”. This should be carefully monitored.

Finally, it is noted that the Master Plan guides tourism development and outlines sustainable tourism and ecotourism principles. 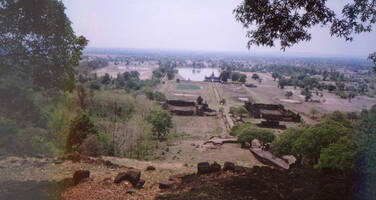