Threats identified at the time of inscritpion of the property:

On 24 November 2015, the State Party submitted a report on the state of conservation of the property, which is available at: https://whc.unesco.org/en/list/1361/documents. It provides information on the progress achieved in implementing the recommendations adopted by the Committee at the time of the property’s inscription on the World Heritage List, which included the following: establish the proposed management system, ensure effective presentation of the property, pay attention to material authenticity in ongoing conservation projects, reinforce the monitoring system for buildings, continue with community engagement, develop a database of all attributes relating to the Outstanding Universal Value (OUV) of the property, and elaborate a comprehensive conservation strategy. The State Party reported on the following:

The State Party concludes that, although much still needs to be done, the property’s inscription on the World Heritage List highly contributed to a change of approach at a political and social level, placing the urban and built heritage of Jeddah at the centre of urban policies.

The strong commitment of the State Party to the conservation and management of the property should be noted, as well as the fact that work has been undertaken on most of the recommendations made by the Committee at the time of inscription in 2014

It should be noted that the State Party has successfully made progress in various areas: namely the reinforcement of the legal and regulatory framework through the approval of the new Saudi Antiquities, Museums and Urban Heritage Law and of the Historic Jeddah Building Regulation and Bylaws; the strengthening of the management system with the involvement of international conservation experts within the SCTH staff and the reorganisation of the Historic Jeddah Municipality with the creation of 8 sub-zones for management purposes; the improvement of bidding regulations, now based on the most economically advantageous bid instead of the cheapest price; the setting up of clear intervention priorities, and cultural initiatives to stimulate public participation and to improve the attractiveness of Historic Jeddah.

The completion of the inventory of the historic buildings within the property and the buffer zone has allowed the identification of 608 historic buildings, of which 156 were not counted in the 1980s inventory. This work has also highlighted the advanced state of decay of several buildings (52 in bad condition and 38 collapsing) and revealed that 115 have collapsed since the first survey in the 1980s. What has so far not been undertaken is a detailed database of the attributes relating to the Outstanding Universal Value of the property, such as the tower houses, other urban houses, the wikalas, mosques and Zawiyas (and not just the protected historic buildings) and  the spatial patterns of  urban forms and defined urban quarters.

The State Party has already undertaken important steps in order to address the most urgent cases, to ensure the retention of surviving structures and to change the perception towards the historic built heritage of Jeddah. Several renovation, rehabilitation and restoration projects have been or are being completed and many others are scheduled or envisaged, some of which to be carried out by the private sector.

However the seriousness of the situation requires additional efforts to develop a detailed conservation strategy, encompassing legal, financial, planning and technical measures to prevent further losses, to stabilise the buildings in precarious condition and eventually to reverse the trend.

Heritage Impact Assessments (HIAs) carried out in accordance with the ICOMOS Guidance on HIAs for Cultural World Heritage properties for the projects mentioned in the report would assist the State Party in achieving the primary goal of sustaining the property’s Outstanding Universal Value (OUV), including the authenticity of its attributes, while enhancing its overall integrity and revitalising its social fabric.

The measures undertaken demonstrate the commitment of the State Party in ensuring the conservation and revitalisation of Historic Jeddah. Further measures are needed to strengthen this work, such as the development of detailed attributes of OUV and a conservation strategy with a timeline for reaching a position that has reversed the downward conservation trend. Furthermore, the integration of an urban approach into this processes to ensure the sustainable management and conservation of the property, especially the creation of the eight sub-zones, would ensure that the urban spaces which link the different buildings to each other be managed from a heritage perspective and in an integrated manner. This approach would contribute to the reinforcement of the protection of the attributes which carry the OUV. 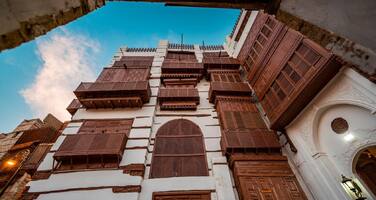