On 28 January 2015, the States Parties submitted a joint state of conservation report, which is available at https://whc.unesco.org/en/list/985/documents/. Progress in a number of conservation issues addressed by the Committee at its previous sessions is presented in the report as follows:

The report also notes that the State Party of South Africa is conducting a feasibility study for the proposed cable car near the property.

The commitments of the State Party of Lesotho, firstly to the preparation of a credible and comprehensive inventory of rock art, based on thorough research and documentation, and secondly to the forthcoming study on the potential cultural contribution of landscape elements, are both fundamental to understanding the cultural attributes of Outstanding Universal Value (OUV). These projects need to be completed expeditiously, to facilitate evaluation of the state of conservation, to ensure effective heritage management and to guide appropriate presentation.

Some progress has been made, and further initiatives are proposed, with respect to training of staff within the Sehlabathebe management base. Staff training has also been included within the terms of reference for the rock art research and inventory project. However, more extensive training is required in the immediate future, so that there will be adequate capacity within the State Party to implement the outcomes and recommendations from the research and inventory work.

Both research projects and the forthcoming training initiatives warrant high priority and expeditious implementation. Adequate resources should continue to be made available until the inventory, landscape elements study and additional training, as well as the implementation processes, which flow from their preparation, are complete.

At this stage, it is appropriate that the moratorium on conservation interventions to any of the rock art sites continues, pending completion of the inventory and provision of additional training.

The development of the Biodiversity Resources Management Bill – a more comprehensive version of the Nature Conservation Bill 2005 – is ongoing as a high priority, which is welcomed. It is also noted with appreciation that any major development projects around the property would be subject to impact assessment and discussions under the trans-boundary coordination structures.

The States Parties’ report does not address issues relating to invasive alien species and fire, in response to the Committee’s request that invasive species and fire management be addressed jointly by Lesotho and KwaZulu-Natal (Decision 37 COM 8B.18). 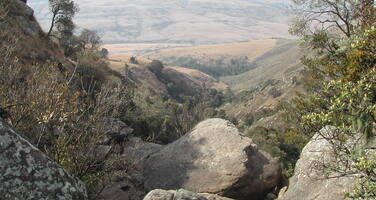