Total amount provided to the property: USD 202,917 (2001-2010: Technical and Financial Assistance from the Ministries of Foreign Affairs and Culture in the framework of France-UNESCO Cooperation).

2.46 million Euros by the European Union (for World Heritage, movable and intangible heritage)

Since the start of the conflict in March 2011, the security situation has not allowed any missions to be undertaken to the World Heritage properties in Syria.

On 14 January 2015, the State Party submitted a state of conservation report for the six World Heritage properties in Syria, which is available at https://whc.unesco.org/en/list/1348/documents. The report details damages to the property in five of the eight archaeological parks (one out of three in the governorate of Aleppo; four out of five in the governorate of Idlib) highlighting that some parks are not accessible due to the presence of armed groups.

In addition to the damages reported in 2014, the State Party reports considerable damages due to the use of heavy machinery and bulldozers to dig the sites and break ancient stones in order to reuse them in new illegal constructions. In Jebel Sem’an, at Qal’at Sem’an Park, the northern, western and north-eastern areas of the main Saint Simeon monastery have been damaged as well as the Triumphal arch and the mosaic floor in the bath area. In the same park, at Sitt ar-Roum, the church masonry has been destroyed and smashed into building material, and at Refade ten residential illegal constructions have been built. In Jebel Barisha Park, the sites of Baqirha, Deiroune and Dar Qita have been affected; in Jebel Zawiye Park, the town of al-Bara has been vandalized and damaged on a massive scale; as have the sites of Btirsa, Mujleya, Ba’uda and Bshilla. In Jebel Wastani Park, Kafr Aqareb and al-Fassouq have also incurred damages.

In addition to these damages and to those reported in 2014, satellite images provided in the December 2014 UNITAR/UNOSAT report show in Shinshara the construction of a new 135m wall, multiple areas of disturbed soil, visible looting holes and approximately 80 new structures built amongst the ruins. The images show 29 shelters located in Rabi'ah and 22 in Serjilla. Other sources report damages at Kherbet Kseibjeh and vandalism and looting at Kafr Hwar (probably in historical locations close to the property boundaries).

See item 36 of this Document (General decision on the World Heritage properties of the Syrian Arab Republic).


36. General Decision on the World Heritage properties of the Syrian Arab Republic

The armed conflict in Syria started in March 2011 and has constantly escalated leading to significant violence and degradation of humanitarian conditions. Since the 38th session of the World Heritage Committee in 2014, the destruction of Syria’s exceptional archaeological, urban and architectural heritage has reached a deplorably high level and has continued to seriously affect all six inscribed properties, the twelve sites inscribed on the Tentative List, and a wide number of highly significant cultural heritage sites all over Syria. Cultural heritage in Syria continues to be damaged by shelling, street fighting, targeted explosions, extensive illegal excavations, and use for military purposes and as military training areas, construction violations, and quarrying, in addition to intentional destructions and inappropriate use of archaeological sites by internally displaced populations.

On 14 January 2015, the State Party submitted a state of conservation report with detailed information on the destruction and damage at the six World Heritage properties, available at https://whc.unesco.org/en/sessions/39COM/documents. On 12 February 2015, the State Party submitted the state of conservation report of all the sites on the Tentative List and a report on the intentional destruction of built heritage. These reports represent an official statement from the Syrian authorities and collate available information from the branches of the Directorate General of Antiquities and Museums (DGAM) and from social media. However, the State Party notes that ground access in Syria is extremely limited for heritage experts, and the full extent of the damage to World Heritage properties cannot be assessed in detail at this time. Therefore, the reports do not provide first-hand information on several sites, in particular the Ancient City of Aleppo and the Ancient City of Bosra, and thus do not allow a full understanding of the extent of damage to the properties. For the preparation of the state of conservation reports for the World Heritage Committee, additional information was sought from civil society organizations, international organizations, local experts and the media to supplement official data.

The State Party reported on the work carried out by the Directorate General of Antiquities and Museums (DGAM), despite the difficult working conditions, to monitor the World Heritage properties and cultural heritage in general, assess damages, undertake emergency conservation and risk mitigation actions whenever possible, and inventory built and movable heritage. The report also stressed the DGAM efforts in raising local awareness and highlighted the positive role played by local communities in some cases to safeguard heritage and limit illegal excavations.

The state of conservation report of the sites inscribed on Syria’s Tentative List indicates that:

The report on intentional destruction of Syrian built heritage relies mostly on local communities and pictures published in the social media; it indicates that:

In the Aleppo region:

In the Deir ez-Zor region:

On 26-27 May 2014, in the framework of the European Union-funded “Emergency Safeguarding of Syrian Cultural Heritage” project, with co-funding from the Flemish government (USD 170,000), UNESCO organized an international expert meeting to help rally the International Community to safeguard Syria’s cultural heritage. 120 international and Syrian experts from 22 countries and UNESCO’s partners took part in this meeting and produced a detailed action plan, which provides short, medium and long term actions to safeguard immovable, movable and intangible heritage.

Since the 38th session of the World Heritage Committee (Doha, 2014), UNESCO has pursued its actions to assist the State Party in its continuous and sustained efforts to safeguard cultural heritage. At the international level, UNESCO raised the awareness of the international community on the destruction of cultural heritage in Syria; these sustained efforts led to the adoption by the United Nations Security Council of Resolution (UNSC) 2139 on 22 February 2014 which called « on all parties to immediately end all violence which has led to human suffering in Syria, save Syria’s rich societal mosaic and cultural heritage, and take appropriate steps to ensure the protection of Syria’s World Heritage Sites ».

On 3 December 2014, UNESCO organised at its headquarters an international conference on the “Protection of Heritage and Cultural Diversity at Risk in Iraq and Syria”, with financial support from the Government of Kuwait, and called for the creation of “protected cultural zones” around cultural heritage sites, suggesting a start could be made with emblematic monuments in the Ancient City of Aleppo.

On 12 February 2015, the UNSC adopted resolution 2199 that condemned the destruction of cultural heritage and adopted legally binding measures to counter illicit trafficking of antiquities and cultural objects from Iraq and Syria and called on UNESCO and other concerned entities to implement this ban.

At the national level, UNESCO has pursued its activities to monitor the situation of Syrian cultural heritage, raise awareness on its protection, undertake short, medium and long-term actions to safeguard it, and coordinate the work of national and international entities working on its safeguarding. In the framework of the European Union-funded “Emergency Safeguarding of Syrian Cultural Heritage” project (2.46 million Euros) that was started in March 2014, and  is implemented in partnership with ICOMOS and ICCROM, the following activities were undertaken:

In May 2015, the World Heritage Centre will organise a technical meeting on post-war reconstruction in the Middle-East context, focusing on the Ancient City of Aleppo as a case study. The meeting will set out the basic recommendations on reconstruction from the theoretical and practical points of view.

ICOMOS has supported many of these and other initiatives.

Under the Partnership with the UNESCO-EU Project for Emergency Safeguarding of Syrian Cultural Heritage (mentioned above) ICOMOS has the following responsabilities:

ICOMOS, including its different International Scientific Committees, commits itself in:

At its 18th General Assembly, in Florence in November 2014, the ICOMOS Executive Committee tasked an ICOMOS Working Group on the safeguarding of the cultural heritage in Syria and Iraq, to cooperate with UNESCO and other international and national partners, and with the support of ICORP, to coordinate the activities of ICOMOS related to fostering cooperation and exchanges, monitoring, awareness raising, communication, training, assisting and planning for the safeguarding of cultural heritage in Syria and Iraq, as long as the present conflict and its subsequent consequences continue.

The armed conflict situation in Syria and its continued escalation has affected the six World Heritage properties and has substantially limited the capacities to adequately sustain and protect their Outstanding Universal Value (OUV). The properties are increasingly threatened by a specific and proven imminent danger, in particular the Ancient City of Aleppo, which has been extensively destroyed and which runs the risk of further irreversible destructions, including its Citadel. The illegal excavations across archaeological sites and tells in Syria are a major source for the illicit trafficking of cultural objects and are causing extensive and irreversible damages to those sites, as well as  providing looted artefacts for sale  in  regional and international black markets.

It is recommended that the World Heritage Committee commend the DGAM and all heritage professionals in Syria and local communities who have made sustained efforts to protect cultural heritage and to monitor it closely.

The World Heritage Centre and the Advisory Bodies will continue to support the State Party in the identification of the necessary corrective measures and in the development of a Desired state of conservation for the properties, as soon as the situation allows for an assessment mission to be carried out.

Furthermore, it is recommended that systematic documentation of all damage incurred at the World Heritage properties be duly pursued whenever the situation allows, and that the World Heritage Committee reiterate its call to the State Party to safeguard damaged property through minimal first aid interventions to prevent theft, further collapse and natural degradation, and refrain from undertaking other measures until the situation allows for the development of a comprehensive strategy and action plan that respond to international standards and high-quality scientific methods. With regard to post-conflict reconstruction, it is recommended that the World Heritage Committee call on the State Party to plan the future of World Heritage properties according to international conservation charters and standards, in full consultation with the World Heritage Centre and the Advisory Bodies. 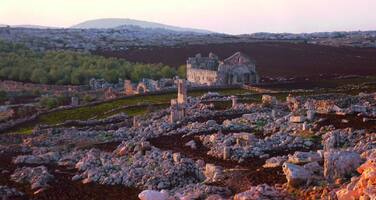