The site at Zhoukoudian, in the western hills to the south-west of Beijing, is a fossil-rich site which has produced hominid and other fossils of quite exceptional importance. The 0.24 sq. km. core area of the World Heritage site contains ten localities of archaeological interest and is under the direct control of the Chinese Academy of Sciences. The buffer zone of 1.7 sq. km. is under the control of the local authority and contains a further sixteen localities. Major archaeological research on the site took place between 1921 and 1937, although further work was carried out in the 1960s.

Although originally a cave, Locality 1 is now a deep trench, with archaeological stratification 46 metres deep. The archaeological strata are unstable, as is the cave roof (consisting of breccia), wherever this still exists. The mission suggested that the trench should be roofed over to prevent further erosion of the sides, with public access being provided via the Upper Cave. The museum display dates from 1972 and does not do justice to the finds. The mission recommended that the master plan of the site should be prepared giving priority to the remodelling of the museum facilities and Locality 1-Upper Cave. To do so, it was recommended that a specialist in museum design be commissioned and it was agreed, in principle, by the Chinese authorities concerned that all the necessary maps, information on the existing buildings will be compiled of the site and a geophysical survey of Locality 1-Upper Cave be completed within a period of six months. If a proper remodelling and upgrading is undertaken, this very important archaeological site could became a living World Heritage site, and attract visitors. 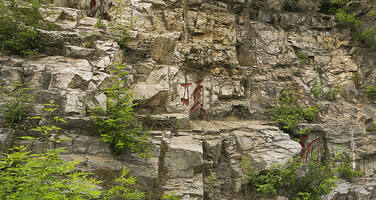