State of Conservation Mausoleum of the First ... 1994
Print

The mission visited the Emperor's burial tumulus itself, where it commented on the rundown condition of the tourist stalls.

It was also able to spend some time visiting the terra-cotta army, the laboratories and to discuss conservation problems with the museum staff, including problems concerning the earthen structure of the burial trenches and the conservation of pigment on the figures themselves.

When viewing trench 3, which is in the course of excavation, it was noted that box trenches were being used; the mission recommended that the adoption of modern open-plan excavation techniques would probably be more fruitful. At present, boring is the only non-destructive archaeological survey technique used in the monument and its vicinity. Modern archaeological survey methods by geophysical prospection should be used in addition, and the mission advised that modern archaeological techniques should form one of the topics to be covered at the forthcoming symposium. 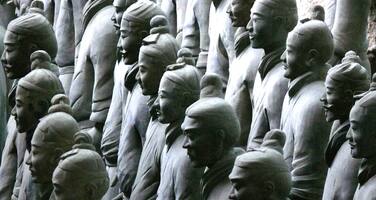