Progress has been made in addressing the recommendations of the Committee and the 2012 IUCN reactive monitoring mission.  However, continuing and potential new logging operations on West Rennell and the confirmed introduction of rats present major threats to the integrity of the property.  The likelihood of the introduction of Giant African Land Snail to Rennell Island in the absence of biosecurity measures remains a significant concern as it is virtually impossible to eradicate this species once it becomes established.  Combating invasive rats and snails will require the provision of technical expertise along with financial support to ensure the necessary engagement of the local community.

Reports of plans to commence bauxite mining in West Rennell in 2014 are cause for significant concern. Although the total area is small the mining sites are widely scattered.  The potential impacts on the property are similar to those of logging, and involve forest clearance, loss of wildlife habitat, introduction of alien species from barges using the logging ponds for access, and introduction of soil to replace extracted material.  It is recommended that the World Heritage Committee request the State Party not to permit bauxite mining on Rennell Island if it cannot be demonstrated that such activities would not have an impact on the OUV of the property.

It is noted that, while there is Protected Areas legislation available to protect the property from logging, the local communities must resolve to apply for it to be applied to the property. It is recommended that the Committee encourage the State Party to continue and strengthen support to the awareness raising process through the provision of additional funding and expertise, in order to strengthen the protection of the property. In the meantime, the finalisation of the Provincial Ordinance prepared in 2009 should be given priority by the Provincial Government, and additional technical assistance sought as required. It is recommended that the Committee also request the State Party to immediately put in place interim measures to mitigate the impacts of existing logging operations, halt new logging operations, and to defer consideration of bauxite mining licence applications until the new management plan has been approved and is being implemented.

Noting the elaboration of a new management plan, including better management practices to address over-exploitation of coconut crab and other marine resources, it is recommended that the Committee urge the State Party to finalize the new management plan and submit it to the World Heritage Centre and IUCN for review. The State Party’s intention for an inter-agency and intergovernmental approach to climate change adaptation and mitigation is also noted.

It is considered that the assessment of threats undertaken with support from the Australian Government, and attached to the State Party report, could provide a basis for the development of corrective measures and a Desired state of conservation for the removal of the property from the List of World Heritage in Danger. Successful implementation of these measures will take time, and require additional resources and full support from all levels of government, the local community, other stakeholders of the international community. IUCN, through its Oceania Regional Office (ORO) is in a position to provide further technical advice to the State Party, as required.

3.  Notes with appreciation that some progress has been achieved in the implementation of the recommendations of the Committee and the 2012 IUCN reactive monitoring mission;

4.  Welcomes the assessment of threats to the property undertaken with support from the Government of Australia, and considers that the findings and recommendations of this assessment could provide a basis for the State Party to develop, in consultation with the World Heritage Centre and IUCN, a proposal for the Desired state of conservation for the removal of the property from the List of World Heritage in Danger, as well as a set of corrective measures;

5.  Notes with concern the reported plans to commence bauxite mining in West Rennell in 2014, which is likely to have similar impacts to the Outstanding Universal Value of the property as logging, and requests the State Party to undertake rigorous Environmental Impact Assessments for these plans to demonstrate that they will not have an impact on the property, in conformity with IUCN’s World Heritage Advice Note on Environmental Assessment;

6.  Also requests the State Party to urgently put in place interim measures to mitigate the impact of exiting logging operations, halt new logging operations, and to defer consideration of bauxite mining licence applications until the new management plan has been approved and is being implemented;

7.  Further requests the State Party to undertake urgent action to halt the further spread of rats on Rennell Island and prevent them from entering the property, and to put in place the biosecurity controls necessary to prevent further introductions of invasive species to the island, and reiterates its invitation to the State Party to apply for International Assistance to support this work;

10.  Decides to retain East Rennell (Solomon Islands) on the List of World Heritage in Danger. 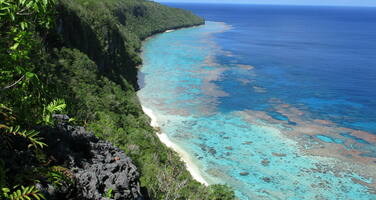