A report received from Lithuania on 4 February 2003 describes the steps, which have been taken by the Lithuanian Government to comply with the recommendation of the World Heritage Committee. In order to jointly carry out the EIA, Lithuania identified a group of experts and made provisions for co-operation with the Russian Federation on this issue. However, no information on the EIA was given to Lithuania nor was a meeting of the experts set up. Despite repeated requests through bi-lateral channels, the Lithuanian authorities have received no information on the status of the oil field. A meeting was held in the Centre on 12 March 2003 with the Ambassadors of Lithuania and the Russian Federation to discuss the current situation and to obtain more information. By letter received on 9 April 2003, the Russian Ministry of Natural Resources reported that from 3 to 4 March 2003 a meeting was held, under bilateral intergovernmental co-operation in the field of environment protection, with Russian and Lithuanian officials. The meeting focused mainly on the ecological aspects of economic activities in this region. The Russian officials reported on the outcome of the state ecological expertise procedure, which was carried out for the project, and related to the production structure for the deposit of the “Kravysovskoe”. The procedure complies with Russian legislation and observes international standards in this field. The Ministry of Natural Resources offered to organize a Russian-Lithuanian Conference on the environmental aspects of sea units located in the Baltic Sea, to be held on the LUKOIL - Kaliningradmorneft, in April 2003.

IUCN received a copy of a report from the State Party of the Russian Federation dated 31 November 2002. The report noted that an environmental impact assessment (EIA) of the project “Creation of producing structure for oil deposit Kravtsovskoe (D-6) in the Baltic Sea” was being carried out by the Ministry of Natural Resources of the Russian Federation (MNR). The World Heritage Committee (Budapest 2002) requested close co-operation between the States Parties of the Russian Federation and Lithuania related to the EIA for this project and other relevant management issues. The MNR reports that it sent all the relevant information related to the project to the Ministry of Foreign Affairs of the Lithuanian Republic in September 2002. However, the Lithuanian State Party reported in February 2003 that no information on the EIA had been communicated to them. Additionally, the Lithuanian report noted that they had not been asked to co-operate on the EIA.

IUCN is concerned about this lack of co-operation between the two States Parties, especially as the implementation of the project is to commence this year. The Lithuanian Ministry of Environment (LME) indicated in its report that they have identified a group of experts and made all the necessary steps to ensure co-operation with the Russian State Party. The LME’s report notes that information available from the Russian Federation could not be used for the development of effective environmental protection measures and/or risk assessment and emergency contingency measures and plans, as requested by the World Heritage Committee. The LME expressed its concern about the potential danger of contamination of the site. It also emphasized the need to carry out a UNESCO/IUCN monitoring mission in case the co-operation between the States Parties does not take place before the oil exploration begins. The Russian MNR notes that they are considering the organization of a meeting of experts within a framework of bilateral intergovernmental co-operation between the Russian Federation and Lithuania. IUCN welcomes this proposal, but notes that no concrete timeframe has been proposed in the State Party’s report.

2. Further recalling Article 6.3 of the World Heritage Convention, which states that "each State Party to this Convention undertakes not to take any deliberate measures which might damage directly or indirectly the cultural and natural heritage... situated on the territory of other States Parties of this Convention",;

4. Strongly advises that oil production should not commence before all the necessary research has been carried out, including a joint Lithuanian-Russian EIA process, leading to the preparation of a joint work plan for project implementation and prevention/mitigation measures to ensure the conservation of the World Heritage property;

6. Further requests a detailed report by the State Party of the Russian Federation to be prepared on the current status and future plans for the project, to be submitted to the World Heritage Centre by 1 February 2004 in order that the World Heritage Committee can examine the state of conservation of the property at its 28th session in 2004.

1. Recalling the decision taken at its 26th session concerning the Curonian Spit,

2. Urges both State Parties to work co-operatively on the project’s EIA, preparation of risk assessment measures and emergency plans,

3. Strongly advises that oil exploration should not commence before all the necessary research has been carried out, leading to the preparation of a joint work plan for project implementation and prevention / mitigation measures to ensure the conservation of the World Heritage site,

4. Requests a joint UNESCO/ICOMOS/IUCN mission to be undertaken to the site in full collaboration with the Russian and Lithuanian authorities, and a detailed report by the State Party of the Russian Federation to be prepared on the state of the project, by 1 February 2004, for examination by the 28th session of the World Heritage Committee. 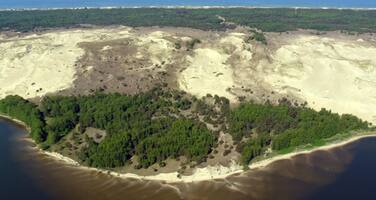