Following an ICOMOS evaluation mission to the site (October 2001) and the recommendations made to the 25th extraordinary session of the Bureau, the State Party was requested to provide a report on the measures undertaken in this respect.  The Secretariat received a report on 11 March 2002, indicating that:

1.  Concerning the use of the landing stage

·  The present project for the landing stage at Pointe-à-Carcy is only for the use of cruisers in transit or those disembarking passengers at their final destination.

·  The Québec Port Authority does not intend to establish a home port at this site.

·  The terminal work is completed, the elevated gangways and mobile platforms will be installed in the spring and the landscaping will be carried out at the same time.

·  The question of increased traffic at the site is presently being studied using specific indicators.

·  The preliminary results of this evaluation have been measured by means of accurate simulations.

·  Data gathering will continue in 2002 and 2003 and the results will be compared in 2004 with the results of the earlier environmental examination in order to verify any divergences.

3.  Concerning the second stage of the project (refuelling of ships, tunnel to convey baggage and bridges to facilitate free access to the quays) and the question of the conversion of the former Champlain maritime terminal in order to clear the Pointe-à-Carcy area and have only one transit port:

·  The second phase of the project is therefore postponed because the cruise market must first exist, the Canadian Government should release funds and a working group should be set up by the Québec Port Authority during the summer of 2003 to examine potential sites, including that of the Champlain Maritime Terminal, to create a home port.

4.  Concerning revision of the boundaries of the World Heritage site to include the entire esplanade of Pointe-à-Carcy:

·  The examination of this revision  and in particular the boundaries of the territory, will be studied by the City of Québec, the Ministry of Culture and Communications and Parks Canada between March and April 2002.

·  A consultation procedure with the real estate owners concerned will be carried out in May 2002.

·  A document containing justifications will be prepared between April and June 2002.

·  Verification and validation of this document will be carried out during August 2002.

·  Transmission of this dossier submitting the adjustment to the boundaries of the World Heritage site will be accomplished in September 2002.

The report also notes that the Working Group will use this opportunity to study certain revisions that could be made to the entire perimeter of the site.

5.  Concerning the definition of an urban plan for the area in association with the Municipality:

·  Canada’s Sea Law provides for the submission of a land use plan by the Québec Port Authority; this plan was submitted in October 2000 and ratified in February 2001.

·  A consultative committee comprising the three levels of government (municipal, provincial and federal) shall be established to examine this question.

2. Congratulates the Canadian authorities on the actions undertaken in accordance with the recommendations made by the ICOMOS mission and by the 25th session of the Committee;

3. Requests the State Party to continue working in close consultation with ICOMOS and the Centre;

4. Requests the State Party to provide by 1 February 2003, a progress report on this matter for examination at its 27th session in June/July 2003.

"The Committee takes note of the report transmitted by the State Party and congratulates the Canadian authorities on the actions undertaken in accordance with the recommendations made by the ICOMOS mission and by the 25th session of the Committee.  The Committee requests the State Party to continue working in close consultation with ICOMOS and the Centre and to provide a progress report on this matter by 1 February 2003 for examination at its 27th session." 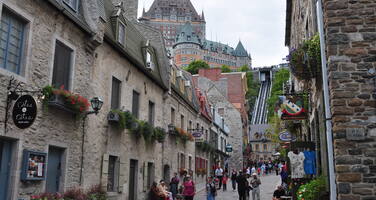