Potential impacts of increased mining activity in the region

The Canadian Parks and Wilderness Society (CPAWS) informed IUCN in January 2002 that, while there was great potential for enhanced protection of the Nahanni National Park Reserve (NNPR) ecosystem through the Deh Cho process and potential expansion of the Park boundaries, the proposed Canadian Zinc Corporation mine at Prairie Creek 32km upstream from the Park is of grave concern.  IUCN is informed that the mine site is situated in a very narrow, steep-sided valley, in close proximity to the Creek.

Parks Canada reported on 7 February 2002 it was awaiting the results of an Environmental Assessment Study by the Mackenzie Valley Environmental Impact Review Board (MVEIRB) on a zinc mine in the South Nahanni River watershed that could have an impact on the World Heritage site, before determining any action. A proposal to re-open a road to the site to move a diesel fuel cache was dropped and the fuel will be incinerated on site.  It also reported that production had resumed under a previously approved licence, at a tungsten mine located on the Flat River, upstream from the NNPR.  It is expected that the company will request a renewal of its licence in late 2002, and Parks Canada is working towards establishing a cooperative water monitoring programme with the company.  In addition, a proposal has been made to undertake seismic studies downstream of the NNPR in August 2002.

IUCN received a copy of the (MVEIRB) Report of Environmental Assessment on the Canadian Zinc Corporation Underground Decline/Exploratory Drilling and Metallurgical Pilot Plant Developments of 22 January 2002. The assessment considered several issues, including the integrity of the tailings facility and the potential impact of its failure on water quality; the potential impact of changes to water quality from the development affecting the Bull Trout, Salvelinus confluentus, which is a vulnerable species, and the potential of the proposed development to affect the ecological integrity of nearby Nahanni National Park.

The MVEIRB concluded that the proposed development is likely to have a significant adverse impact on the environment, including an adverse effect on water quality as a result of drainage from the rock and ore pile into Prairie Creek. The mine was subject to an environmental review in the early 1980’s, however the context for the development had changed over the past 20 years.  The National Parks Act has been revised, and the South Nahanni River within the Nahanni National Park Reserve has been designated as a Canadian Heritage River; There is a lack of an articulated government policy about land use and development in areas adjacent to the NNPR.

The MVEIRB noted that conflicting land use and management policy is currently being applied, and expressed its concerns that unalterable land use decisions may result in significant adverse impacts should such decisions be found to compromise the nationally and internationally valued Nahanni National Park World Heritage site. Furthermore, the Environmental Assessment process under the MVRMA [Mackenzie Valley Resource Management Act] is not the appropriate forum for a resolution of land use and policy conflicts that are best resolved by the Government of Canada. The absence of comprehensive land management in the area around the Nahanni National Park may undermine the conditions of integrity as set out in the UNESCO Operational Guidelines and the revised National Parks Act.

As part of its recommendations, the MVEIRB suggested that the Ministers responsible decide on the scope and nature of acceptable protection to ensure the ecological integrity of Nahanni National Park, including the possibility of establishing a buffer zone where land use activities are restricted to those compatible with the Park purpose and Management Plan. IUCN received copies of letters from CPAWS to the Minister of Canadian Heritage (15 March 2002) and the Minister of Indian Affairs and Northern Development (27 March 2002) on the Prairie Creek Mine and the results of the MVEIRB Environmental Assessment.  Both letters include the following information: Cyanide, PCBs and diesel fuel have been stored at the mine site for 20 years; A tailings pond is situated within metres of the Creek; Ores at the proposed mine are highly contaminated with mercury, as well as arsenic and antimony; The region is prone to flash floods and has experienced significant earthquakes (as high as 6.9 on the Richter Scale) and associated rock slides within the past 20 years. This situation places the waters of Prairie Creek and the South Nahanni River at risk from contamination, which will be further exacerbated if the mine is to go ahead.  IUCN also notes that there has been talk of expanding the World Heritage site to better protect the Nahanni ecosystem for 20 years, during which time there have been continuous incursions into the surrounding area from mining operations.

1. Expresses strong concern with regard to the zinc mine, as well as the findings of the Mackenzie Valley Environmental Impact Review Board (MVEIRB) report, including the comments on the inadequacy of the Mackenzie Valley Resource Management Act (MVRMA) to resolve the issues of land use and policy conflicts involving the site and its surroundings;

2. Requests the State Party to provide by 1 February 2003, information on how the concerns and recommendations contained in the MVEIRB report will be addressed in relation to the impact on the World Heritage site to be examined by the Committee at its 27th session in June/July 2003;

3. Encourages the State Party to extend the site.

“The Committee expresses strong concern with regard to the zinc mine as well as the findings of the Mackenzie Valley Environmental Impact Review Board (MVEIRB) report, including the comments on the inadequacy of the Mackenzie Valley Resource Management Act (MVRMA) to resolve the issues of land use and policy conflicts involving the site and its surroundings. The Committee requests the State Party to provide information on how the concerns and recommendations contained in the MVEIRB report will be addressed in relation to the impact on the World Heritage site by 1 February 2003." 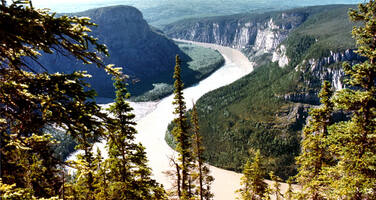