New information: In December 1999, the Committee adopted the decision requesting the State Party to submit to the World Heritage Centre before 15 April 2000, a state of conservation report on developments at Mount Emei Scenic Area, including Leshan Giant Buddha Scenic Area. On 14 April 2000, the Centre received the report requested by the Committee from the Ministry of Construction of the Government of China.

The Ministry of Construction of China stated that the Ministry paid careful attention to the construction of the tourist light monorail. In September 1997, the Ministry approved the project while taking into account environment protection and the scale of construction. The project is a non-polluting source of transportation for tourists providing views from the top of the scenic area. The structure of the monorail is simple and efficient (the width of rail is 40cm, and the width of carriage is 150cm, each car is 6 metres long and the total length of the vehicle is less than 15 metres). The total length of the monorail is 2100 meters. The Ministry of Construction is of the view that the monorail construction was preferable to building a new walk way which shall damage the existing natural environment. The project was completed and came into operation in October 1998.  In March 2000, a site mission was headed by the Ministry’s Vice Minister to investigate the current situation. The mission concluded that the tourist light monorail did not have significant impacts on the natural values of the site. The monorail project is considered by the Chinese authorities to have minimal impacts on the ecology of the site. With a view to better conservation of this World Heritage site, the Ministry of Construction of China is willing to invite both international and national experts to visit the site and view the operations of the monorail and undertake a scientific analysis and recommend measures to further minimise environmental impacts.

The Centre has been notified of a potential World Bank project at the site of Leshan Giant Buddha, to build a walkway close to the Giant Buddha. The report of the Ministry of Construction does not make any mention of such a project.

The report has been transmitted to the advisory bodies (IUCN and ICOMOS).

The Bureau may wish to examine the views and findings of the advisory bodies that will be provided at the time of its twenty-fourth session and take the appropriate decision thereupon.

The Secretariat arranged the reactive monitoring mission by IUCN and ICOMOS to the site in July and August 2000 following the construction of a monorail at the Summit of Mount Emei. Concerns had been expressed regarding the impact of the monorail on the natural and cultural values of the site. In general, the mission found that the Mount Emei Administration has taken steps to enhance the conservation of the area in a number of ways, including through the construction of the monorail, the management of tourists visiting the area, and the plans to gradually move out people who are living in the site. The paths in the site are frequently patrolled, and staff removes all litter, thus resulting in a very tidy appearance in most places.

The monorail, follows the line of the former path between the Golden and Wanfo Summits, was inspected by the consultants from IUCN and ICOMOS to ascertain its impact on the natural and cultural values of the site. Very little vegetation has been cleared for the monorail and the vegetation is now encroaching on the old path, which is no longer used. For the most part, the monorail is unobtrusive and not easily visible from a distance.

In conclusion, the mission was of the view that the monorail does not make any significant adverse impact on the natural values of the Mount Emei World Heritage site, on the contrary, it probably serves to minimize the impact of tourism on the Wanfo Summit.

The mission also identified some other conservation issues such as tourist pressure and biodiversity monitoring to the site.

The mission recommended that the World Heritage Committee should give much higher priority to biodiversity monitoring within both natural and mixed sites of China. This should be considered an essential and normal part of any management plan. The World Heritage Committee should agree on minimum standards for such monitoring programmes, and States Parties should then provide information on how their monitoring programmes relate to the minimum standards. Where additional capacity is needed to develop and implement such programmes, the World Heritage Fund should be considered as one possible source of financial support.

The ICOMOS mission visited the Leshan Giant Buddha in August 2000. The situation at the Leshan Giant Buddha is clearly becoming serious, with incipient danger to visitors because of the worn out nature of the existing stairway and the steadily increasing visitor numbers. ICOMOS commends the decision of the administration of the site not to carry out any alternations to the historic access stairway, which is an integral part of the monument. The solution that is proposed is a bold one but it has been developed with great care and sympathy for the overall view of the Giant Buddha when seen from the river. It will be simple in form and rendered more unobtrusive by the use of surfaces that harmonise with the colour of the natural rock. ICOMOS believes that this is an admirable solution to a serious problem and one that will in no way detract from the cultural values of this important World Heritage monument.

The results and recommendations of the mission undertaken by the advisory bodies will be presented to the Bureau in Cairns, Australia.

The Bureau was informed that in accordance with the request of the twenty-third session of the Committee, the Ministry of Construction of China submitted a report on the state of conservation of this site.  The report dealt particularly with the project to construct a monorail that had been completed. The Bureau noted that the project had been approved by the Ministry of Construction in China in September 1997, taking into consideration environmental protection and the scale of construction of a non-polluting source of transportation for tourists with an aerial view of the scenic area. The width of the monorail is 40 cm, the width of the carriage is 150 cm and each car is 6 meters long and the total length of the vehicle is less than 15 m. The total length of the monorail is 2100 m. The Ministry had opted for the construction of the monorail in preference to the construction of a new walkway which it considered would have damaged the natural environment. The monorail project came into operation in 1998; in March 2000, the Vice Minister headed a team that visited the site and found that the project did not have significant impacts on the natural values of the site. The Ministry is of the view that the monorail project has minimal impacts on the ecology of the site but, with a view to better conservation of the site, is willing to invite both international and national experts to visit the site, view the operations of the monorail and undertake a scientific analysis and recommend measures to further minimise environmental impacts.

The Bureau also noted that though the Centre had been notified of a World Bank Project to build a walkway close to the Giant Buddha, the report submitted by the Ministry of Construction does not make any mention of the project.

The Observer of China thanked the Bureau and advisory bodies for their observations and comments and invited an IUCN/ICOMOS mission to visit the site to view the project and undertake a thorough review of the report submitted by the Ministry of Construction. ICOMOS informed the Bureau that it had foreseen a mission to the site in August 2000 and expressed the hope that IUCN could make an expert available at that time in order to field a joint mission.

The Bureau requested that IUCN and ICOMOS field a mission to the site as early as possible and submit a detailed report on the state of conservation with specific reference to the environmental impacts of the monorail project, environmental safeguards put in place by the State Party and additional mitigation measures that may be necessary and submit that report to the twenty-fourth extraordinary session of the Bureau in Cairns, Australia.

“The Bureau examined the results and findings of the IUCN and ICOMOS missions. The Bureau requested that the State Party should impress upon the managements of all World Heritage properties in China that major projects of this type should not be implemented without the World Heritage Committee being fully informed of all aspects of project planning and implementation and of all environmental impacts. Furthermore, the Bureau drew the attention of the Chinese authorities to the need to improve training of site staff so that they can better monitor and mitigate tourism impacts and develop biodiversity monitoring programmes on the site. The Bureau recommended that the Secretariat, the State Party and the advisory bodies develop follow-up actions. The Bureau also recommended that the report of the IUCN/ICOMOS mission be transmitted to the relevant Chinese authorities.” 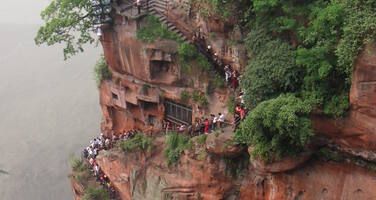