State of Conservation Mountain Resort and its ... 1998
Print

The Bureau, at its twentieth extraordinary session in 1996, recommended that the Chinese authorities adopt a development plan for the town of Chengde in line with World Heritage conservation needs. The Chinese authorities reported to the Secretariat, in a state of conservation report on this property submitted in July 1998, that the city planning department has included World Heritage protection in the historic city’s urban development plan.

According to this report, conservation work has continued since its inscription on the World Heritage List in 1994. A 10-year Renovation Plan of the site was prepared by national experts and approved by the Bureau of Cultural Relics of Chengde City in 1995. An “Overall Management Plan for Chengde City” was adopted by Hebei Provincial Government in 1995. Afforestation measures have been taken for the gardens and the surroundings of the site, with vegetation coverage currently exceeding 90%.

Training and education activities carried out by the site administration have enabled the training of more than 3,500 persons. Promotion “week” and “month” were organized by the City Government to increase the understanding and application of the Law on the Protection of Cultural Relics. Chengde Research Institute of Cultural Properties was established in 1995. Over 30 on-site staff have been trained at other institutes or universities. With assistance from the World Heritage Fund, a Training Course for Site Managers of Cultural World Heritage Properties in China was organized in September 1997 by the State Bureau of Cultural Relics. In addition, the Mayor of Chengde participated in the International Conference for Mayors of Historic Cities in China and the European Union in April 1998 (Suzhou) organized by the World Heritage Centre and exchanged experiences with counterparts from China and the EU.

Security conditions at the site museum have improved, thanks to the technical and equipment support made available from the World Heritage Fund. The security staff has increased from 200 to 300 persons since 1995.  3.4 million RMB Yuan (USD411.600) was invested in the restoration project of Xu Mi Fu Shou Temple and the conservation of artifacts in the site museums.

The management of the site has been strengthened with the Vice-Mayor of Chengde City assuming the responsible supervision of all administration work. A decision was taken to further intensify the protection of the site by the City government so as to strengthen the implementation of the Management Plan.

The Bureau was informed by the World Heritage Centre of reports received concerning increasing urban and tourism development pressures negatively affecting the historical setting within the buffer zone of this site.


The Bureau took note of the state of conservation report submitted by the Chinese authorities and commended the local authorities for their efforts in enhancing the management of the site. The Bureau, however, expressed concern over the rapidly increasing urban pressure within the buffer zone and encouraged the relevant authorities to take appropriate measures to integrate tourism development and urban heritage conservation issues in the Management Plan of the site. 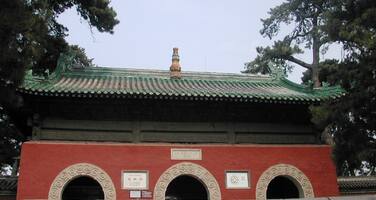