The Bureau was informed of the findings of a Centre/IUCN mission to this site in September 1998 that was favourably impressed with tourism management there. The site is located within the same Minshan Mountain range as the Jiuzhaigou World Heritage area described above. Tourist accommodation facilities in Huanglonggou are limited and future development of facilities is being confined to the town of Chuan Zhu Si, in Songpan County, 40 km of the Huanglong World Heritage area. The 7km boardwalk within the site is well managed and a visitor centre is currently under construction at Huanglonggou.

The mission team urged the Chinese authorities to implement the recommendation of the Committee, made at the time of inscription of this site and Jiuzhaigou in 1992, to link the two sites into a single Minshan Mountain World Heritage Area. The Bureau learned that the Chinese authorities had pointed out the need for undertaking scientific studies to link the two sites into a single World Heritage area nomination and the difficulties in co­ordination between two different County administrations. After the mission team had provided information on cluster nominations submitted by other States Parties, the Chinese authorities expressed an interest in taking the necessary steps to implement the Committee’s 1992 recommendation. The mission also urged the Chinese authorities to explore possibilities for linking the Jiuzhaigou-Huanglong cluster with a selected number of reserves set aside for the protection of the giant panda in Sichuan.

The Bureau commended the State Party for effectively managing tourism in Huanglong. The Bureau requested the Centre and IUCN to co-operate with the State Party to undertake necessary studies for preparing a Minshan Mountain Range World Heritage area nomination linking Jiuzhaigou and Huanglong World Heritage sites and other giant panda reserves as appropriate. The Bureau recommended that the report of the Centre/IUCN mission to China be transmitted to the relevant Chinese authorities.

VII.27 The Committee noted the decisions of the twenty-second extraordinary session of the Bureau as reflected in the Report of the Bureau session (Working Document WHC-98/CONF.203/5) and included in Annex IV on the following properties:

The Committee noted that the Bureau's decision reflected the suggestion to establish an informal contact group on mining and World Heritage and that the IUCN "Draft Policy on Mining and Protected Areas" will be circulated.

The Committee noted the UN official name for the State Party: Federal Republic of Yugoslavia. 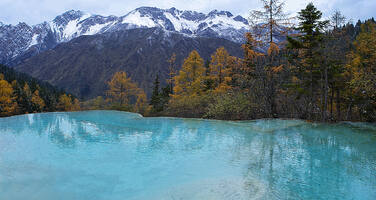