Xanthos, which consists of an archaeological area covering approximately the ancient city and the archaeological site of Letoon, forms a whole which was inscribed on the World Heritage List in 1988 under criteria (ii) and (iii). At the time, ICOMOS had underlined in its comments the need for a management plan including, in particular, the control of the environment in Letoon and had noted that a road crossed the site of Xanthos, and that it would be desirable to divert it.

The mission sent on site in the course of 1991 to assess protection and management problems noted that as to Xanthos the road had been asphalted in 1989. This road not only bears an increasingly heavy tourist traffic, but also runs through several large villages in the valley of Xanthe and this entails a very dense traffic flow of tractors, lorries, and minibuses. It successively runs along the monumental gate of the ancient city, the theatre (cf. below) and a large tomb, which are under constant threat. It would therefore be advisable to divert it in order to keep clear of the ancient site. There presently exists an earthen track which skirts around the acropolis of Xanthos and rejoins the asphalt road. Its conversion would keep access to the mountain villages while protecting the site. Necessary expropriations would be insignificant. It would be very desirable that this solution be examined and carried out.

The rubble of the theatre, situated at the north of the acropolis, encroaches on the above-mentioned road. The laying out of this surrounding area is indispensable for both practical and aesthetic reasons. It would result in improving the appearance of the theatre and its approaches much visited by tourists and in allowing a better understanding of the different phases and characteristics of its construction.

Thanks to bilateral assistance, the Department of Monuments and Museums of the Ministry of Culture considers undertaking the strengthening of the early Christian mosaics of the Agora Church, proceeding with the reinforcement of the mosaics of the Great early Christian Cathedral, as well as covering the nave, and putting back into place the sarcophagus tank known as "The Dancers" which was damaged by acts of vandalism.

During its fifteenth session, the Bureau was informed that the cement public conveniences would be maintained on the site of Xanthos. This matter is the subject of a correspondence between the Secretariat and the Turkish authorities.

As regards Letoon, two preservation measures should be suggested to the authorities. In the first place, it is urgent to stop alluvial deposits from collapsing along the present access road to the sanctuary by building a low retaining wall. In the second place, it is equally indispensable to dig on the strip of land running along the road a new irrigation canal which would divert water from the archaeological site which it constantly threatens.

Moreover, tractors, trailers, lorries and cars are presently allowed at the southern border of the site, beside the early Christian church and the Roman nympheum. However outside the excavation period, vehicles cross the sanctuary by way of the temple terrace. Noxious to the appearance (dust) and to the preservation of the monuments, this access should be prohibited in future.

At a more specific level, the reinforcement of the mosaic of the Apollo temple should be completed and the mosaic put back in place ultimately.

Finally, since the theatre is used every year by the Kumlu Ova community for the celebration of the Tomato Festival, there is a risk of some loose architectural blocks of collapsing. Strengthening works should be undertaken at the north-east gate.

It is interesting to note that the Turkish authorities have defined "special environmental protection areas" in which all development projects liable to modify the environment and the ecosystem are submitted, to the control of a special council which is competent namely in all actions taking place within the context of international conventions. The area of the Xanthe delta and mouth has thus been declared a "special environment protection area" by decree No. 90/77 of 18.01.1990 published in the Turkish official bulletin on laws of 02.03.1990. 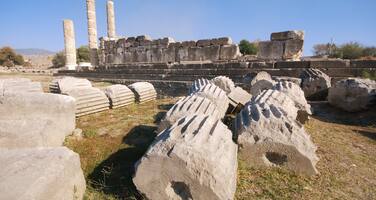