This site, placed on the World Heritage List in 1980 under criteria (i) and (iii), was dealt with in a reply from the Brazilian authorities to the survey on the state of conservation of world heritage cultural sites carried out by the Secretariat in 1988.

Since its inclusion in the List, changes have been made in the legal and administrative provisions governing it in order to increase the effectiveness of the legal protection provided. The authorities of the State of Minas Gerais - while not encroaching on the powers of the municipal authorities - have issued several decrees aimed at ensuring special protection for the towns of Ouro Preto and Mariano and their natural environment, and at declaring certain areas to be in the public interest so that they can be expropriated with a view to more effectively preserving the environment.

At the federal level, changes in the legislation bear mainly on the administrative relationship between the National Secretariat for the Historic and Artistic Heritage (SPHAN) and the national 'Pro-Memoria' Foundation, which are the two bodies responsible for the conservation of sites on the List.

As its population has grown, the town of Ouro Preto has been faced with complex problems stemming from its position, its topography, the characteristics of its subsoil and the actual system of land organization and occupation. Although the entire urban area has been provided with increased legal protection since it was included in the List, it is impossible to prevent certain alterations to the character of the town. SPHAN is constantly striving to conserve and preserve not only outstanding architectural and artistic monuments, but also the whole urban complex in which constant supervision and guidance is provided for new buildings being put up.

In comparison with the buffer zone, as was noted in the previous paragraph, the town is expanding, especially in its outlying areas. A large number of new districts and housing estates have been established, demanding excavation works, the opening of thoroughfares and work on the urban infrastructure, entailing intense occupation of the area. The resulting changes are of course affecting the environment.

Since Ouro Preto was placed on the List, a great deal of conservation and restoration work has been done on it. Most of this work has been completed, in particular the architectural and artistic repairs on religious and civil monuments, including the churches of 'Sao José', 'Nossa Senhora de Rosario do Padre Faria', 'Nossa Senhora do Rosario', 'Nossa Seharo das Mercês e Misericordia', 'Nossa Senhora da Conceicao de Antonio Dias' and 'Santa Efigenia', the chapels of 'Nossa Senhora das Dores e de Sant'Ana', the museums of 'Inconfidencia', the church of 'Nossa Senhora do Carmo', the 'Case dos Contos' and the 'Casa da Baronesa', and the botanical garden. Work has also been done to shore up the slopes of the hills which, because of heavy rainfall, were in danger of causing landslides and hence the' destruction of certain parts of the town and monuments. Mention should also be made of the continual efforts of the town-dwellers themselves to conserve the whole of the urban architectural complex. Additional work is still required, however, particularly in respect of the urban infrastructure: electric system, drains, improvements in traffic flow, drainage of run-off water and enhancement of the environment through the creation of green areas.

While the 1988 ICCROM report gives a favourable view of the conservation of the historic part of the town, it unfortunately records the uncontrolled development of buildings on the hillsides, despite the risks of a landslide. It should be noted that so far there exists no comprehensive conservation plan. It would be useful for the Committee to remind the competent authorities of the urgent need for such a plan. 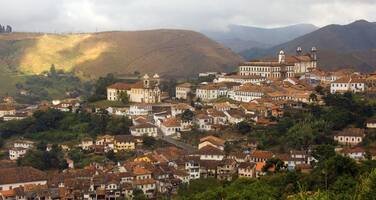