The Secretariat received a progress report from the State Party on 30 January 2004. It presented the efforts in documenting and registering the structures and archaeological material, domestic and burial, discovered during the construction of the new road as part of the Special Project "Provias Departamental". Between June and September 2003, an emergency plan for the area of “La Banda” was established. The Government is preparing the development of a feasibility study for Cultural Tourism (Plan Copesco), as well as a call for tender to build a site museum in due time. Furthermore, the report stated, as was done in earlier reports, that the finalization of the Master Plan is foreseen in 2004.

ICOMOS commented that the State Party reported, in response to a request from the World Heritage Committee at its 27th Session in 2003, that it had set up an expert working group to prepare a Technical Plan for Chavín, to serve as the basis for the eventual Master Plan for the site. A number of reports on the causes of its deterioration have been produced, covering the topography of the site and its surroundings, water erosion, the chemical and biological characteristics of the materials used in the structures, their foundations, and decay due to micro-organisms. As a result the main causes of damage and degradation have been identified, which will enable technical solutions to be developed that will reduce or prevent the impact of external influences. The Technical Plan is being modified so as to give priority to certain studies to be carried out during 2004 into the stability of the slopes of the Cochas Mountains and the underground water in the region of the site. Emergency works, planned to last four months, began in the second half of June 2003, but they were delayed because of the need to carry out rescue archaeological investigation and conservation works necessitated by the construction of a road on the right bank of the Rio Mosna.

At the present time a topographical survey of the entire site and the architectural survey of all the structures have been completed. Work is proceeding on the eradication of a particularly tenacious weed, known as kikoyu, and the cleaning of the surfaces of certain monuments. Other projects that are currently in progress are the Chavín Cultural Tourism Project, training courses and workshops in archaeological conservation, which involve the local population, and preliminary planning for the future Chavín National Museum.

ICOMOS, as well as the Secretariat, are conscious of the magnitude of the task involved in preparing a management plan for the Chavín archaeological site, but it remains regrettable that no archaeological surveys were conducted prior to the road construction. The Committee may wish to invite the State Party to request a joint ICOMOS-UNESCO Reactive Monitoring mission to Chavín to assess damages and discuss the timetable for the preparation of the Management Plan.

The World Heritage Committee, 1. Taking note of the report transmitted by the State Party (Decision 27 COM 7B.97), 2. Regretting that the construction of a new road through the World Heritage property caused damages, which should have been assessed through archaeological surveys prior to the construction activities, 3. Recalls paragraph 56 of the Operational Guidelines (2002) and strongly urges the State Party to avoid similar interventions within the World Heritage property of Chavín in the future; 4. Requests the State Party to submit, by 1 February 2005, a detailed report containing an assessment of the damage to the property, for consideration by the Committee at its 29th session in 2005.

1.  Taking note of the report transmitted by the State Party,

3.  Recalls paragraph 56 of the Operational Guidelines;

4.  Requests the State Party to submit, by 1 February 2005, a detailed report containing an assessment of the damage to the property, for consideration by the Committee at its 29th session in 2005. 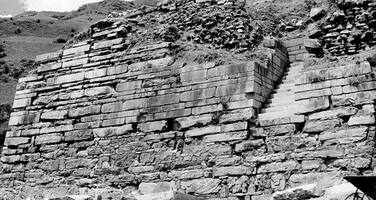