A report on the state of conservation of the property was received from the State Party on 27 January 2012. The report responds to issues raised by the Committee in decision 35 COM 7B.14 and provides additional information on conservation actions undertaken at the property. Several press articles reporting on the inflow of water to the property are annexed to the report. Copies of the Management Plan for Keoladeo National Park 2010 - 2014 are also annexed to the report.

The State Party reports on three measures to provide adequate water flows to the property which are necessary to sustain Keoladeo’s wetland values. These include the release of 15 million cubic feet (mcft) of water from the Ajan Bandh reservoir in September 201.1 which the State Party reports as having stimulated a successful heron nesting season with 538 pairs from 12 species of herons.

In addition the State Party advises on the completion of the Dholpur – Bharatpur Drinking Water Project and the commencement of water flows to the property in October 2011. Water is being released to the property at the rate of 4 mcft per day and as of January 2012 250 mcft has replenished the property’s wetland systems. The State Party reports that water monitoring from the Chambal river shows an “adequate supply of fishes and crustaceans” to provide forage for the property’s bird populations. The report notes that the marshes of the property and associated birdlife have responded positively to the water replenishment. Furthermore, it is noted that enhanced water flows have re-catalysed the local tourism industry.

The State Party notes that the Govardhan Drain project which is expected to provide 350 mcft of water to the property is still under construction with a revised completion date expected in March 2012. The World Heritage Centre and IUCN note that the 2011 State Party report had indicated that construction began in April 2011 and would take six months to complete.

The World Heritage Centre and IUCN emphasize the importance of consistent and sustainable water replenishment as a foundation for the natural seasonal ecological functioning of the property’s wetland systems. Equally, it is emphasized that water quality is as important as quantity for the functioning of the wetlands. The ecosystem health of the property also underpins tourism and local livelihoods. The World Heritage Centre and IUCN recall the recommendations of the 2008 Mission that environmental water flows of 550 mcft per annum are considered a minimum to sustain the property’s wetland values. The completion of the Govardhan Drain project, and the 350 mcft which it will provide, should therefore be expedited as soon as possible to augment the improved water flows which have been re-established to date. The World Heritage Centre and IUCN note that the State Party does not provide information on the release of water from Panchana Dam, as urged by the Committee at its 35th session (UNESCO, 2011). They consider that the release of water from Panchana Dam should remain an option to top-up the water supply to the property, particularly when the supply of water from the Dholpur-Bharatpur Drinking Water Project is reduced after four years, as planned. The wetland systems should not be placed under abnormal duress through a water regime of critical dryness and extremes of wetness.

b) Ecological monitoring and Management Plan

The State Party reports the implementation of an ecological monitoring programme across a range of 8 indicators for selected birds, mammals, reptiles, vegetation and water levels. Thresholds have been set to ensure the Outstanding Universal Value of the property is maintained. The monitoring programme sits within the framework of the property’s Management Plan 2010-2014, a copy of which has been included in the State Party report.

The State Party also report on monitoring of a number of satellite wetlands which act as an essential part of the overall wetland ecosystem providing habitat to birdlife in the region. The monitoring programme was initiated under a UNESCO-IUCN project in 2005 and it is continuing under a follow up project through to 2014.

The State Party report details bird counts for 15 heron species from 1991 to 2011. These show fluctuations and a number of failed breeding seasons particularly from 1997 onwards which are attributed to a lack of water.

Furthermore the World Heritage Centre and IUCN appreciate the time-series data on heron bird counts. This data illustrates the serious decline in total heron numbers since 1997. Numbers of birds average 5,777 p.a. in the 6 years between 1991 and 1997, however, only 850 p.a. in the 15 years since then, a decline of over 85%. The World Heritage Centre and IUCN note that the dramatic decline in bird populations demonstrates that the Outstanding Universal Value of the property has been seriously compromised. They emphasize that it is imperative that water flows are restored and maintained at adequate levels, and they consider that the continued implementation of the ecological monitoring programme should demonstrate the clear and sustained recovery of bird populations in the property by 2014.

The World Heritage Centre and IUCN have also received reports on threats from inappropriate residential and industrial development close to the park boundary and the need to further strengthen participatory management. In response to these reports, the World Heritage Centre requested further information from the State Party, which was received on 11 March 2012. The State Party notes that a 500 meters eco-sensitive area is defined around the property, which cannot be widened due to the proximity of Bharatpur town. The State Party also notes that no illegal conversion of agricultural land to other uses has so far taken place, nor are any factory developments proposed within the eco-sensitive zone.

The World Heritage Centre and IUCN recall that at the Committee’s 35th session, the State Party had noted that in addition to removal of Prosopis, local communities were involved in prevention of offences, education, and grassland management. They consider that the participatory approach to management of the property should be continued and further intensified.

The World Heritage Centre and IUCN note the progress achieved in restoring the water supply to the property’s wetland systems. However, more water is needed to sustain the system along with a commitment, wherever possible, of ongoing water allocations even during times of general water shortage, including through release from the Panchana Dam. Adequate and sustained water allocations estimated at 550 mcft will be necessary to ensure the recovery of the bird populations which are central to the Outstanding Universal Value of the property. Systematic monitoring of the bird numbers and other environmental indicators will be vital to monitor long term recovery. The completion of the delayed Govardhan Drain project is essential to augment water flows to levels which can sustain the ecology of the wetlands in the longer term. As this project is anticipated to be completed in March 2012, the Committee may wish to request confirmation of completion at its 36th session.

2.   Congratulates States Parties for the excellent work accomplished in the elaboration of retrospective Statements of Outstanding Universal Value for World Heritage properties in their territories;

3.   Adopts the retrospective Statements of Outstanding Universal Value, as presented in the Annex of Document WHC-12/36.COM/8E, for the following World Heritage properties:

4.   Decides that retrospective Statements of Outstanding Universal Value for World Heritage properties in Danger will be reviewed by the Advisory Bodies in priority;

5.   Further decides that, considering the high number of retrospective Statements of Outstanding Universal Value to be examined, the order in which they will be reviewed by the Advisory Bodies will follow the Second Cycle of Periodic Reporting, namely:

3. Welcomes the efforts and the progress made by the State Party to replenish the water regime within the property’s wetland systems through the decisions to release environmental water flows from reservoirs and completed water related projects and urges the State Party to continue to provide adequate water flows on a sustainable basis;

5. Encourages the State Party to continue ecological monitoring programmes, which are independent of specific projects, in order to assess long-term ecosystem changes and particularly the recovery of bird populations;

6. Also urges the State Party to further intensify the involvement of local communities in the management of the property, building on its existing achievements, including in the control of invasive species and other aspects of management, as appropriate; 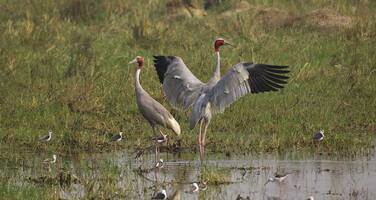