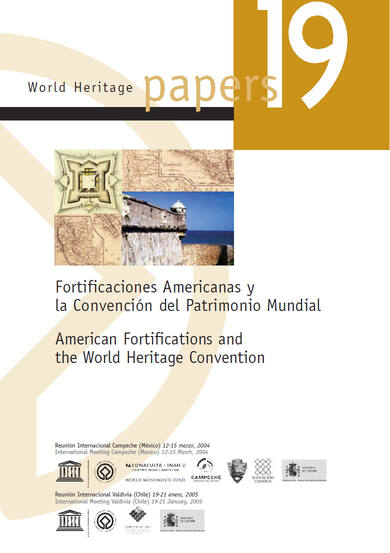 American Fortifications provide a unique overall vision of a continent and, for this reason, have been recognized as useful scenarios for international cooperation. The results presented here clearly show the need for a continuous effort to enable a greater coordination of technical collaboration to establish a shared reading of history. Fortifications, far from serving their original function of defence, now reduce the distance between our shores and act as gateways to stores of knowledge of the American continent.

Despite the fact that certain defensive complexes have been respected by the course of time, the construction of their walls and the overall condition of fortified structures demonstrate a need for urgent solutions. Damage sustained by these structures endangers their outstanding universal value, the reason for their inscription on the World Heritage List. The sea, urban development and the loss of original function have brought about a deterioration which is difficult to reverse.

The issues presented here have already been examined on a number of occasions by the World Heritage Committee; however, the discursive process is being increasingly nurtured by new courses of action. In this case, the attention to detail as regards to the historical reading of the thought processes of a continent is a task that cannot be delayed when it concerns sustaining the attributes of authenticity and integrity of sites already listed or which remain on the Tentative Lists. One finds in these pages arguments which define the singular value of fortified landscapes, their raison d’être along the coastlines or throughout the interior of the continent.

Pre-hispanic fortifications have occupied a prominent position in the discussion, in an equal measure to the need for maintaining ways of revision and criticism that does not lose sight of the broader issue. There is however, still much to be done, and among the tasks pending should be emphasized the need to include on the World Heritage List a comprehensive Caribbean fortified scenario. A scenario that will bring together a new concept of fortifications that at the present time is fragmented and would allow the advancement of a transnational serial nomination.

Similarly, the group extends an invitation to reflect upon other marine zones, in particular, in the Pacific Ocean. The sinuosa vertical is another outstanding grouping for potential inclusion on the List which exemplifies another way of thinking of the Americas which complements historical narration and is necessary as a demand of universality.

The State Parties to the World Heritage Convention serve as a motivation for encouraging a joint effort to facilitate an articulation and a subsequent completion of a fortified geography of the Americas on the UNESCO World Heritage List.