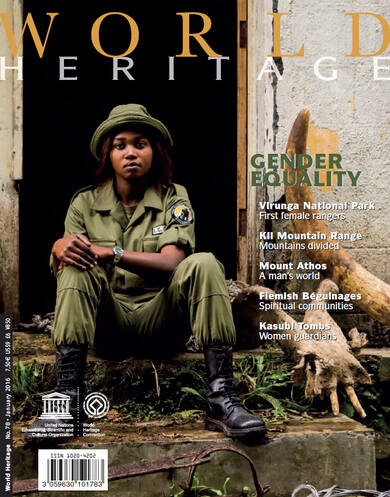 It is increasingly recognized that culture has an essential role to play as a driver of sustainable development, contributing to the eradication of poverty and enhancing social inclusion. Culture helps to define people’s identities and determines the way they shape their future. Gender equality, which is a UNESCO priority, refers to the roles and responsibilities of men and women and gender dynamics within families, societies and cultures.

In many respects, UNESCO World Heritage sites are prime examples of setting standards and sharing practices around the world, and this issue examines the role of gender in many aspects of heritage, whether it involves the spiritual beliefs underpinning the functions of a place, the roles of the women and men at a site, or even whether men or women are allowed access. Moreover, the scope of the World Heritage Convention is vast, and with 1,031 sites now listed, there is no shortage of examples of the different ways men and women live, work and pray in different cultures.

In this issue, we begin with a broad overview that looks at gender bias in the early days of the World Heritage Convention, male/female parity in examining nominations, and attributed gender roles in the preservation of World Heritage sites. We look closely at certain World Heritage sites, such as the Tombs of Buganda Kings at Kasubi (Uganda) where women are the caretakers of the sacred site; the Kii Mountain Range in Japan, with its separate access to mountains for men or women only; the spiritual communities of women in the Flemish Béguinages of Belgium; the Orthodox centre of Mount Athos (Greece), where women and children are not allowed; and Virunga National Park (Democratic Republic of the Congo), now home to the first female rangers in this area. Gender and the 2003 Intangible Cultural Heritage Convention is another topic, reflecting on how gender is commonly expressed, performed and even constituted in and through intangible cultural heritage.

The cases presented illustrate the diversity of cultures, beliefs and practices that are exercised around the world, and the roles that gender plays in just a few of them. With the sustainable development policy adopted by the General Assembly of States Parties to the World Heritage Convention in November 2015, we look towards a more peaceful and sustainable planet – the balance of power in our relationships will continue to be an important issue to redress in this new framework.