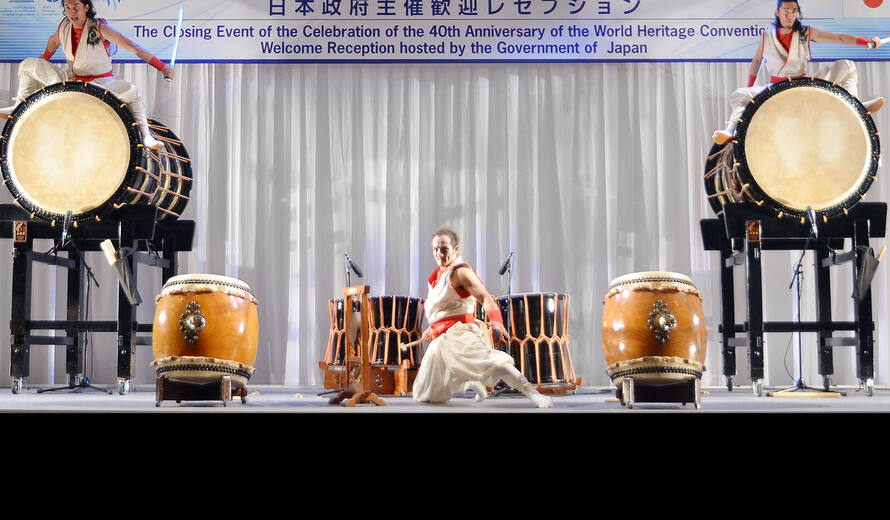 The opening ceremony of the Closing Event taking place in Kyoto from 6 to 8 November featured a performance by UNESCO Artist for Peace Sarah Brightman, and a traditional drum performance by the Japanese group Hi Ryu (Flying Dragon).

In her address, the Director General  remarked on the success of the World Heritage Convention, citing it as a model of international cooperation. She also pointed out three priorities for its future development: reinforcing the capacity of States Parties in site preservation, before, during and after inscription, and by recognizing best practice in heritage management; involving local authorities, indigenous communities and youth in site management; and, as an overall goal, reinforcing the credibility of the World Heritage Convention.

The celebration in Kyoto closes a year of national and regional events around the world.  Conferences, workshops, youth forums and other activities dedicated to reflection on the implementation of the Convention and its challenges have led to this gathering of international experts. Presentations and panel discussions underway in Kyoto focus on subjects in line with the theme of the anniversary year: Sustainable Development and Local Communities.

UNESCO Goodwill Ambassador Genshitsu Sen, 15th Grand Master of the Urasenke tradition of chado (tea ceremony), addressed the participants with a strong message of the need to share cultural traditions to cultivate peace and mutual respect.

A powerful moment during the day occurred when a statement was read out by the participants of the World Heritage Youth Programme, held in Kyoto from 2 to 5 November,  and called "World Heritage: the roles of local communities and youth for the next decade". Aged from 20 to 30 years old from different regions of the world and keenly interested in World Heritage preservation, the young people discussed their roles in the future of the Convention, and expressed their heartfelt desire to be more actively involved in all aspects of the implementation of the Convention. The statement met with resounding applause.

The first panel discussion, ‘Dealing with Challenges’, moderated by former UNESCO Director General Koichiro Matsuura, covered topics such as major challenges in heritage site protection over the past forty years, historical perspective on the evolution of the Convention, a legal viewpoint on the concept of responsible sovereignty, and balancing preservation and development in African countries.

A selection of events and activities carried out in different regions throughout the anniversary year were presented, and discussed by the participants. A consultative meeting on World Heritage and Sustainable Development in Ouro Preto, Brazil, an international conference in South Africa on living with World Heritage in Africa, a report on the World Heritage Volunteer activities (50 in 25 countries) in 2012, and an international symposium in Republic of Korea on involving communities for better management of sites in Asia were some of the events that were touched on.

In the coming days, the first official recognition of best practice in World Heritage site management will be given to the Historic Town of Vigan (Philippines). The site was selected among 28 that were nominated for consideration. The launch of a new book published to mark the anniversary: “World Heritage: Benefits Beyond Borders”, a co-publication of UNESCO and Cambridge University Press, financed by UNESCO/Japanese Funds-in-Trust for the Preservation of the world’s cultural heritage, will also take place on the last day of the event.

The World Heritage Convention was adopted on 16 November 1972 and is one of the most widely accepted treaties in the world, with 190 States Parties and 962 sites inscribed on the World Heritage List.

The event is co-organized by the UNESCO World Heritage Centre and Japan’s Ministry of Affairs, Agency for Cultural Affairs, Ministry of the Environment, and Forestry Agency, which are cohosting the event.

Gina Doubleday: g.doubleday@unesco.org
Accreditation is not required to cover the event, but journalists must register at the venue (Kyoto International Conference Center).