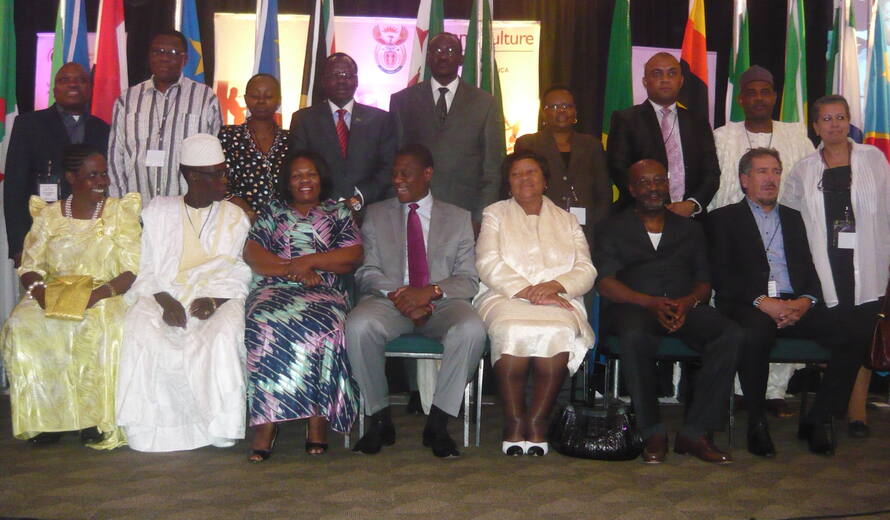 On the occasion of the 40th anniversary of the UNESCO World Heritage Convention, over 300 delegates, including 16 African Ministers of Culture, Tourism, Environment and Home Affairs as well as representatives from the African Union, the African World Heritage Fund and experts in cultural and natural heritage from across the continent and around the world actively participated in a high-level conference on the theme of “Living with World Heritage in Africa” from 26 to 29 September 2012 in Gauteng, South Africa.

The conference mobilized Ministers to participate in a variety of colloquiums. The Ministers’ Roundtable discussions allowed the Ministers to reflect on and define their priorities for World Heritage Conservation, and to issue a Statement in support of the Government of Mali..

This conference, which is considered the largest regional celebration of the 40th anniversary of the World Heritage Convention to date, provided a platform to discuss experiences with World Heritage, role of communities, challenges and opportunities in achieving sustainable development while protecting and conserving natural and cultural World Heritage properties in Africa.

During the opening ceremony, the Minister of Culture of South Africa, Mr Paul Mashatile, alerted participants about the underrepresentation of the African continent on the World Heritage List and called for all to “…strive to put forward more of its places of Outstanding Universal Value for nomination to the List.” Furthermore,

the Deputy Director-General of UNESCO, Mr Getachew Engida, appealed to all Ministers of Culture to ensure that their Governments contribute to the African World Heritage Fund, a UNESCO Category II Centre based in South Africa, which is actively working to strengthen the implementation of the World Heritage Convention in Africa and to assist States Parties in harnessing the potential of their heritage for sustainable growth and development.

In response to this call, the Government of Nigeria announced their donation of 1 million USD to the African World Heritage Fund.

An outstanding moment in the conference took place when 13 various community representatives from across Africa took the floor to give their perspectives on living with World Heritage. One of the key phrases resulting from the conference englobed the spirit of all participants regarding the safeguarding of World Heritage in Africa: “nothing about us without us!”

The outcomes of this international conference on “Living with World Heritage in Africa” was presented to the Africa Group at UNESCO Headquarters in Paris on 5 October 2012, and will also be presented to the African Ministers of Culture Conference in Kinshasa, Democratic Republic of Congo (29 October to 2 November 2012), and in Kyoto, Japan on 6 November 2012 during the Closing Event of the Celebration of the 40th Anniversary of the World Heritage Convention.