Recommendation adopted by the participants of ten Asian countries of a serial Itinerant Workshop on the Conservation and Management of Persian, Timurid and Mughal Architecture

With the financial support of the World Heritage Fund, as well as national organizers of India, the final of a series of "Itinerant Workshops on the Conservation and Management of Persian, Timurid and Mughal Architecture", has successfully taken place in Delhi and Agra, from 6 to 12 April 2009 in India. It was jointly organized by the World Heritage Centre, the Archaeological Survey of India (ASI), UNESCO New Delhi Office and the Aga Khan Trust for Culture. This final workshop brought together site managers from a selection of World Heritage sites in 10 countries: Afghanistan, Bangladesh, India, Iran, Kazakhstan, Kyrgyzstan, Pakistan, Tajikistan, Turkmenistan and Uzbekistan, as well as cultural heritage authorities. It was aimed at improving the cooperation between the heritage professionals in the region with regard to the many similarities in types of heritage. During this final workshop, the participants had a good platform of exchange on many relevant areas of expertise in conservation, research and management, as well as many site visits in Delhi and in Agra. All these were followed by discussions and presentations.

The serial itinerant workshops were also organized as on-site training programmes, held at specifically chosen sites, most of which are World Heritage properties and sites included on the countries' Tentative Lists. After this series of workshops in Iran (2007, Isfahan, Kashan, Shiraz), in Uzbekistan (2008, Samarkand, Bukhara, Shakhrisyabz) and this final one in India (2009, Delhi: Qutab Minar, Humayun's Tomb, Red Fort; Agra: Taj Mahal, Agra Fort, Fatehpur Sikri), the about 70 participants representing 10 Asian countries came out with a joint Recommendation in India.

The Recommendation expressing the need to create a Platform of Exchange and a Secretariat to host the platform were drafted and endorsed. It was also recommended that a Forum of Experts be created to bring together professionals, experts, site managers, practitioners, and other specialists to technically and logistically support the platform. It will also include a documentation centre, a database of expertise, and a forum for discussion. 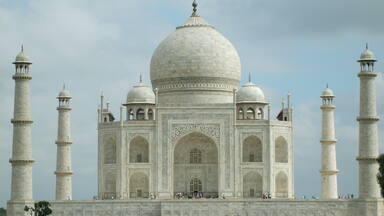 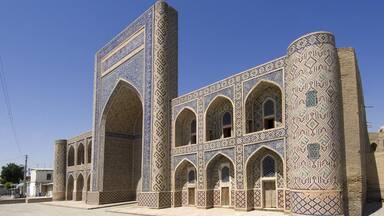 Second Itinerant Workshop on the Conservation and Management of Persian, Timurid and Mogul Architecture
21 April 2008 - 2 May 2008 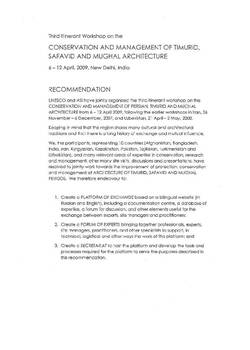 Uzbekistan
top
Forgot your username or password?
Become a member