Over the last few days, Virunga National Park has been the scene of violent fighting between the Congolese Army and Congrès National pour la Défense du Peuple (CNDP) rebels.

On Thursday 9 October, the Managing Director of the Institut Congolais pour la Conservation de la Nature (or ICCN, the body in charge of the Democratic Republic of the Congo protected areas management), Mr. Cosma Wilungula Balongelwa, launched a call for help to the institute’s partners after the rebels took control of the military base of Rumangabo. This military base is located in the vicinity of ICCN Headquarters from which all ICCN guards and their families were evacuated for security reasons.

Located in the north of Goma (North Kivu), the small village of Rumangabo is also situated in the southern sector of the World Heritage site, home of the last remaining population of mountain gorilla. One consequence of the guards' departure is the interruption of the essential monitoring of this flagship species, inscribed on the IUCN Red List of endangered species.

According to our partners still on the ground, the deteriorating situation could have dramatic consequences on the Virunga National Park mountain gorilla population.

In the face of this new crisis, UNESCO remains in constant contact with ICCN and field partners so as to identify needed measures in addition to the reinforced monitoring mechanism applied to the property since 2007.

To obtain additional information on this subject and/or bring your support to ICCN and its partners, please consult the following links. 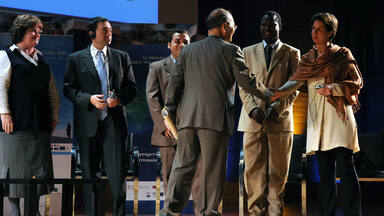