Sundarbans World Heritage site devastated by cyclone, according to UNESCO experts who visited the site 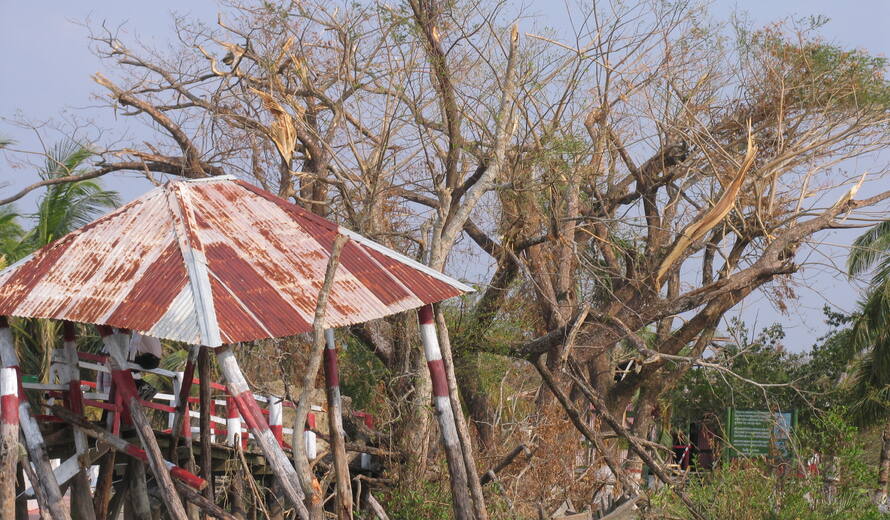 Bangladesh was struck by a powerful cyclone on November 15 which left more than 3,000 people dead and millions without shelter. While a major international relief effort is currently underway to respond Cyclone Sidr's devastating impact on life and property, UNESCO's World Heritage Centre also sent a team to the Sundarbans World Heritage site, which was badly hit by the disaster.

Home to one of the largest populations of the endangered Bengal tiger, the Sundarbans, which was inscribed as a World Heritage site in 1997, is a rich mangrove ecosystem which provides a breeding ground for fish, shrimps and crabs,which, upon migrating out of the World Heritage site, provide a sustainable livelihood for hundreds of thousands of people in the vicinity.

The mission's goal was to assess damage to the ecosystem, develop a response strategy, help Forest Department authorities draft an emergency assistance proposal to the World Heritage Centre and liaise with the UN relief effort to underscore the importance of allocating resources to ensure the long-term productivity of the site.

The cyclone struck at the heart of the East Sundarbans component of the World Heritage site. During their November 30 site visit, the WHC team noted that 40 percent of the site has been seriously affected. In the biologically richest portion of the Sundarbans, which accounts for about 30 percent of total surface area, most foliage has been stripped from branches, and most of larger trees have been blown down or have suffered major crown damage. In the absence of detailed surveys of birds, tigers, deer and aquatic life, the team presumes that a measurable setback has occurred to fauna. If left to recuperate, the Sundarbans, along with its World Heritage component, will likely return to near pre-cyclone conditions within 10 to 15 years.

On the other hand, the Forest Department has lost all of its operational capacity after all of its field stations, boats, jetties and equipment was completely destroyed in the affected region. It is unlikely, on its own, to re-establish its management capacity for many years to come given the other priorities to which national financial resources are allocated. The involvement of the international community will be required to ensure that the Forest Department quickly regains its capacity to manage the Sundarbans and avoid irreversible damage from the risk of uncontrolled exploitation of resources.