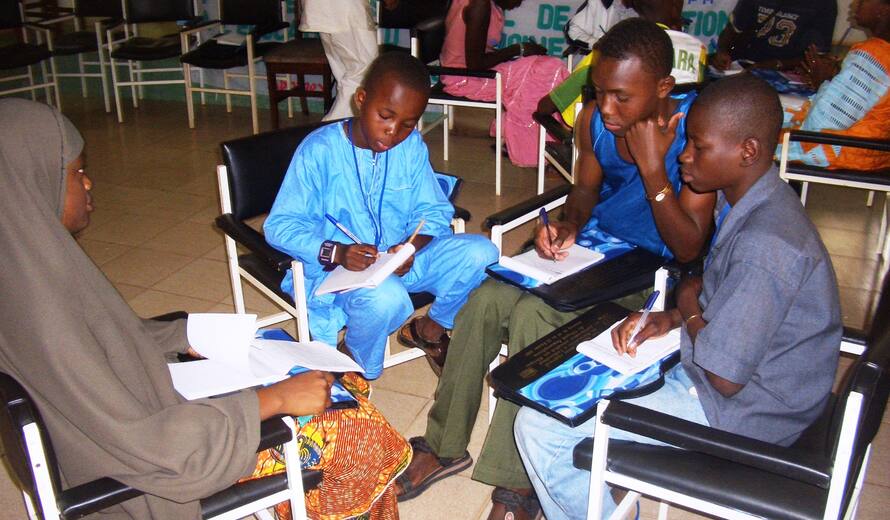 Equipped with shovels, wheelbarrows and water buckets, twelve girls and thirteen boys between the ages of 14 and 17, from eight different countries in West Africa, set about attempting to put their newly learned conservation skills to work at the Royal Palaces of Abomey World Heritage site (Benin) from 19 to 23 February 2007.

The young people, participants in the First World Heritage Education Subregional Workshop in French-speaking West Africa, worked on protecting selected wall sections of the museum area of the site, using sand from the earth found in the courtyard of the museum.

At the workshop, which was organized by the UNESCO World Heritage Centre in collaboration with the Benin National Commission for UNESCO and financed by the Dutch Funds-in-Trust, the young people learned the basics of conservation techniques of prevention and curative conservation. They also received theoretical training from the Abomey Museum Director, Leonard Ahonon.

At the same time, ten teachers participated in the teacher-training workshop on the World Heritage in Young Hands Resource Kit in order to reinforce their capacity in sensitizing their students to the need to preserve national and world heritage in their respective countries. Site management authorities of the Abomey site were hosts and active participants in this training course as well.

Participants agreed that UNESCO should produce pedagogical material adapted to African realities and help to mobilize support for the activities of national heritage commissions.