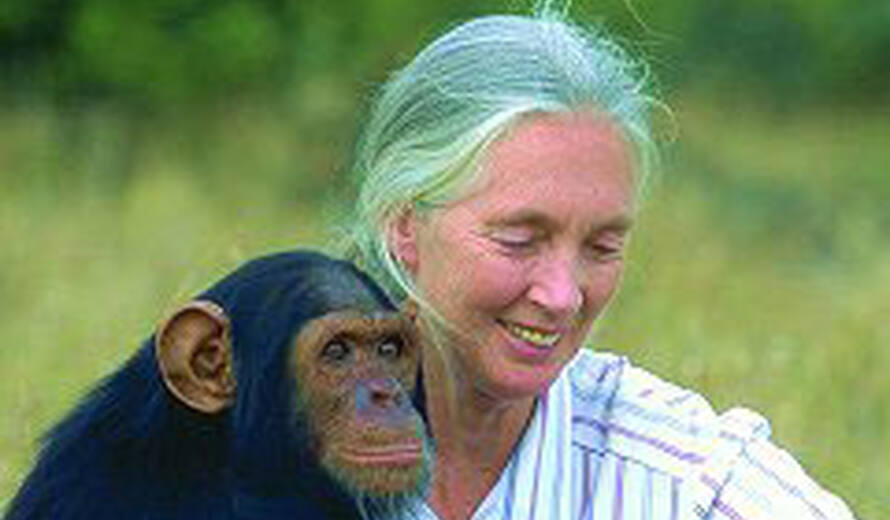 The Director-General of UNESCO, Koïchiro Matsuura, awarded UNESCO's 60th Anniversary Medal to Jane Goodall, the British-born primatologist, on Tuesday 17 January, at the Organization's Headquarters in Paris. The medal was presented in recognition of Ms Goodall's lifelong dedication to the preservation of Africa's endangered apes. "Ms Goodall's untiring work to preserve the great apes of Africa in their natural environment fits perfectly with UNESCO's work in favour of the environment and of sustainable development," Mr Matsuura said. "Ms Goodall was one of the first people to sound the alarm regarding the serious danger facing the great apes, that provide us with a direct link to humanity's past."

Ms Goodall has been a researcher and champion of chimpanzees and other primates since she first arrived in Africa in 1960 at the age of 26. Only 400,000 great apes survive today, compared to two million 50 years ago and experts predict their extinction within three to five decades, unless present trends are reversed.

UNESCO and the United Nations Environmental Programme (UNEP) have been coordinating the Great Apes Survival Project (GRASP), of which The Jane Goodall Institute - a global non profit organization - has been a patron, since 2001. The project, like the Jane Goodall Institute, is seeking to reduce pressure on Africa's primates. According to report by the United Nations Environment Programme (UNEP), 90 percent of the apes' remaining forest habitat will be lost by 2030 if road building, construction of mining camps and other infrastructure developments continue at current rates.

UNESCO and the European Space Agency are also operating a project known as Build Environment for Gorilla, BEGo, using Earth observation technology to map and monitor the apes' often inaccessible habitat in Rwanda, Uganda and the Democratic Republic of Congo.

UNESCO's 60th Anniversary Medal, struck this year to commemorate the Organization's anniversary, has been awarded so far to French anthropologist Claude Levi-Strauss, and to former UNESCO Directors-General Federico Mayor and Amadou-Mahtar M'Bow.