Dar es Salaam, United Republic of Tanzania, 13 January--During a meeting yesterday, Dr. Hussein Ali Mwinyi, President of Zanzibar, and Tirso Dos Santos, Head of the UNESCO Office in Dar es Salaam and UNESCO Representative to the United Republic of Tanzania, reviewed emergency response measures following the collapse on 25 December 2020 of the Beit-al-Ajaib historic building, also known as the House of Wonders, in the Stone Town of Zanzibar World Heritage property.

The House of Wonders is an emblematic edifice of the Stone Town of Zanzibar, and a central component of the of the World Heritage site, which was inscribed on UNESCO’s World Heritage List in 2000.

During the meeting, Mr Dos Santos conveyed the commitment of UNESCO Director-General Audrey Azoulay to support the United Republic of Tanzania in assessing the damage to the building and developing a road-map for its rehabilitation, and for the continued conservation of the Stone Town of Zanzibar World Heritage property as a whole.

It was agreed that starting this month, UNESCO, in partnership with the World Monuments Fund, and the Global Heritage Fund, will send three technical missions to assess the extent of the damage of the House of Wonders and establish a road map towards its rehabilitation.  The first mission will comprise experts from the University of Cape Town (Zamani Project) to carry out a 3D collection of data concerning the structure of the building to inform its rehabilitation. A team of four architectects and structural engineers will follow, to carry out an on-site assessment of structural damage. The third mission will be advisory in nature and will assess the state of conservaton of the entire World Heritage property and recommend a road map for emergency safeguarding measures and long-term conservation and management needs. This mission will be carried out by representatives of the UNESCO World Heritage Centre and the Advisory Bodies to the World Heritage Committee: the International Council on Monuments and Sites (ICOMOS) and the International Centre for the Study of the Preservation and Restoration of Cultural Property (ICCROM).

“Following these emergency assessment missions, UNESCO will continue to work closely with the Revolutionary Government of Zanzibar, the Sultanate of Oman and other partners, to ensure the restoration of the House of Wonders and the safeguarding of the Stone Town of Zanzibar World Heritage site,” said Mr Dos Santos at the end of his meeting with the President.

During the meeting UNESCO’s Representative also presented the Organization’s condolences to the families of the two victims who lost their lives in the collapse of the House of Wonders, and best wishes for a speedy recovery to those who were injured.

The Stone Town of Zanzibar is an outstanding example of the Swahili coastal trading towns of East Africa. Stone Town embodies the harmonious cultural fusion of disparate elements of the cultures of Africa, the Arab region, India, and Europe over more than a millennium. The House of Wonders, a large ceremonial palace built by Sultan Barghash, is one of the town's 18 th and 19th century landmarks. 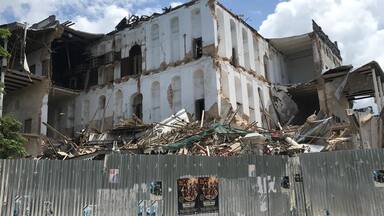