Hagia Sophia: UNESCO deeply regrets the decision of the Turkish authorities, made without prior discussion, and calls for the universal value of World Heritage to be preserved

The Director-General of UNESCO deeply regrets the decision of the Turkish authorities, made without prior discussion, to change the status of Hagia Sophia. This evening, she shared her serious concerns with the Ambassador of Turkey to UNESCO.

Hagia Sophia is part of the Historic Areas of Istanbul, a property inscribed on UNESCO’s World Heritage List. “Hagia Sophia is an architectural masterpiece and a unique testimony to interactions between Europe and Asia over the centuries. Its status as a museum reflects the universal nature of its heritage, and makes it a powerful symbol for dialogue,” said Director-General Audrey Azoulay.

This decision announced today raises the issue of the impact of this change of status on the property’s universal value. States have an obligation to ensure that modifications do not affect the Outstanding Universal Value of inscribed sites on their territories. UNESCO must be given prior notice of any such modifications, which, if necessary, are then examined by the World Heritage Committee.

UNESCO also recalls that the effective, inclusive and equitable participation of communities and other stakeholders concerned by the property is necessary to preserve this heritage and highlight its uniqueness and significance. The purpose of this requirement is to protect and transmit the Outstanding Universal Value of heritage, and it is inherent to the spirit of the World Heritage Convention.

These concerns were shared with the Republic of Turkey in several letters, and again yesterday evening with the representative of the Turkish Delegation to UNESCO. It is regrettable that the Turkish decision was made without any form of dialogue or prior notice. UNESCO calls upon the Turkish authorities to initiate dialogue without delay, in order to prevent any detrimental effect on the universal value of this exceptional heritage, the state of conservation of which will be examined by the World Heritage Committee at its next session.

“It is important to avoid any implementing measure, without prior discussion with UNESCO, that would affect physical access to the site, the structure of the buildings, the site’s moveable property, or the site’s management,” stressed Ernesto Ottone, UNESCO’s Assistant Director-General for Culture. Such measures could constitute breaches of the rules derived from the 1972 World Heritage Convention. 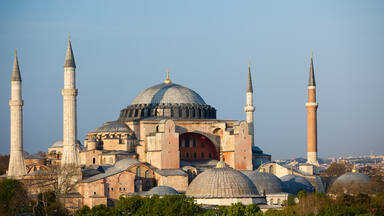