Marine debris accumulates on the beaches of even the most remote and pristine UNESCO marine World Heritage sites, including Aldabra Atoll (Seychelles). Through action, education and research, the Seychelles Island Foundation removed 25 tons of waste, including 60,000 plastic flipflops.

Aldabra Atoll was inscribed on the UNESCO World Heritage List in 1982 as one of the largest raised coral atolls in the world, home to the largest giant tortoise population. Its population of endangered green turtles has increased 500% to 800% in recent decades. Due to its remoteness and inaccessibility, the atoll has remained largely untouched by humans for the majority of its existence.

However vast quantities of plastic litter have been accumulating on Aldabra’s coast and this has dramatically accelerated in recent years. This litter is having devastating impacts on the otherwise near-pristine ecosystems, including by clogging up key turtle nesting beaches.

In response, the Seychelles Island Foundation and the Queen's College, Oxford, set up the “Aldabra Clean-Up Project”. They raised the necessary resources to collect waste and bring it from the remote atoll to the main island of the Seychelles. A team of 12 young volunteers collected 25 metric tons of waste, including 60,000 individual flip-flops and discarded fishing gear.

The project allowed to raise global awareness on the issue of marine debris and plastic pollution. The President of the Seychelles and patron of the Seychelles Island Foundation distributed pictures of Aldabra Atoll’s beaches covered with marine litter during a 2018 G7 meeting. Some of the collected waste was recycled or reused by conservation groups, artists and schools. Scientists also hope to learn more by investigating the degraded plastic, while engineers will test the marine litter on certain circular economy applications. The Aldabra Clean-Up Project demonstrates how UNESCO marine World Heritage sites can challenge all of us to think differently about waste management and how our society is organized.

The project was recently highlighted during an online meeting organized by the UNESCO Regional Office for Eastern Africa. The case study also inspired other marine World Heritage managers during their first workshop to discuss impacts of marine litter and exchange best practices on marine litter monitoring, clean-up campaigns and awareness-raising. A 2018 report indicated marine litter to be present in almost all of the 50 marine World Heritage sites. On Aldabra Atoll alone, an estimated 500 metric tons of marine plastic pollution remains. 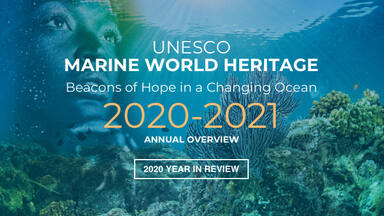