The Global Strategy, launched in 1994 by the World Heritage Committee, has the aim to ensure that the List reflects the world’s cultural and natural diversity of the whole humanity.  The Conference went through the current World Heritage List of the State Parties of the sub-region mentioned above, and identified the gap while exploring potential of the Region and what the Region can offer in the context of World Heritage Global Strategy.

The Conference also served as a platform for further raising awareness on a number of important issues on which the WH Committee pays great attention, such as local communities, indigenous people, Sustainable Development Policy, and climate change, apart from highlighting a number of under-represented heritage categories in the sub-region, such as Cultural Landscape and Historic Town. As a whole the Conference reinforced the capacity of the South Asia’ s State Parties in the implementation of World Heritage Convention.

The Kolkata Conference was jointly organized by UNESO New Delhi and West Bengal Government of India. 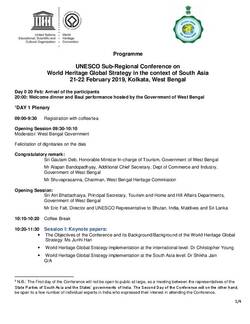 Sri Lanka
Regions (1)
Asia and the Pacific
top
Forgot your username or password?
Become a member