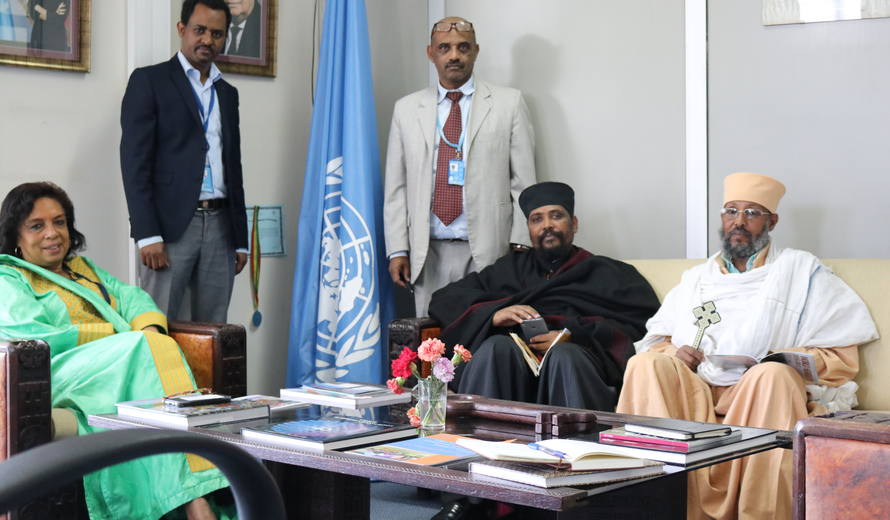 Addis Ababa, 5 November 2018: The Director of UNESCO Liaison Office to AU and UN ECA, and Representative to Ethiopia, Ms Ana Elisa Santana Afonso met with a delegation of the Orthodox Tewahido Church of Lalibela, led by His Holiness Aba Tsige Selassie, Head Administrator of the Rock-Hewn Churches of Lalibela. Begun in the 12th century, this complex of 11 churches was among the first cultural sites to be inscribed on the UNESCO World Heritage List in 1978. A spiritual centre for Ethiopian Christians, Lalibela continues to attract hundreds of thousands of pilgrims each year.

The objective of the meeting was to discuss the efforts underway by UNESCO and its partners to strengthen the conservation of this World Heritage property. The Director informed the delegation that since the early 1970s, UNESCO has been leading international efforts to preserve this unique complex. An EU-funded project completed in 2008 resulted in the construction of protective shelters over five of the rock-hewn churches to protect the structures from water infiltration.

In May 2018, UNESCO dispatched an expert mission to study the state of conservation on the churches and advise on the dismantlement of the temporary shelters. The urgent removal of the temporary shelter has been requested by local communities, which are disturbed by the vibrations, noise and unintended damages to the Churches caused by the shelters.  The 90-page technical report submitted by the team will serve to guide national authorities in undertaking future conservation measures.

UNESCO remains committed to supporting the Ethiopian authorities in their efforts to preserve these outstanding monuments for future generations. To this end, UNESCO’s World Heritage Centre will continue to collaborate with all concerned parties, including the Ethiopian Orthodox Church, the Ministry of Culture and Tourism, the local community and civil society groups, to maintain the outstanding universal value and integrity of the property in a sustainable manner. The conservation works will be a long-term undertaking and require enormous financial resources and the extensive training of a local workforce.

His Holiness, Aba Tsige Selassie, expressed his appreciation for UNESCO’s efforts to preserve the tangible and intangible components of the Lalibela churches and stressed the need to collaborate on the proposed conservation work. He also extended an invitation to the Director to visit the site on 21 November 2018 for the inauguration of restauration work on two other churches in order to understand the situation first-hand and exchange with the communities concerned.