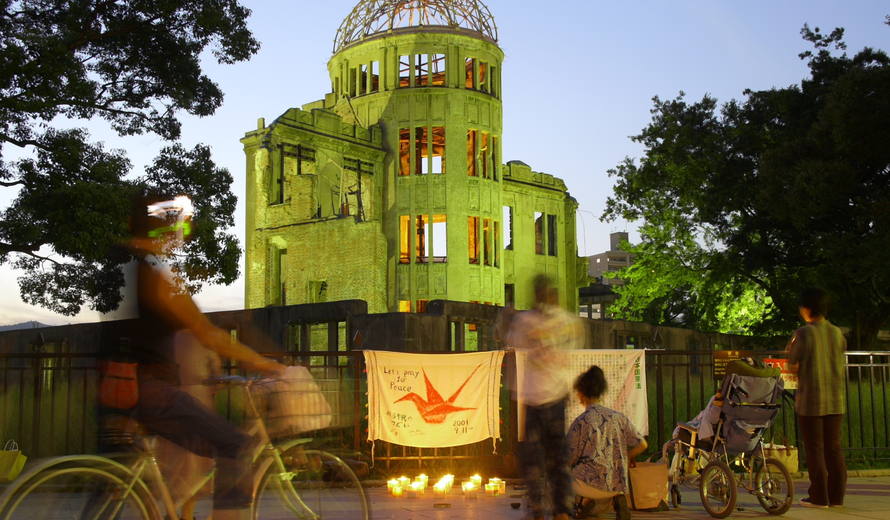 The following is a message from United Nations Secretary General Antonio Guterres delivered on 6 August 2018, at the memorial ceremony in Hiroshima on the 73rd anniversary of the atomic bombing of the city. The Hiroshima Peace Memorial (Genbaku Dome) was the only structure left standing in the area where the first atomic bomb exploded on 6 August 1945. It was inscribed on the World Heritage List in 1996.

"It is a privilege to pay tribute to the citizens of Hiroshima and all those who perished in the blinding flash of nuclear destruction, and in the weeks, months and years that followed, and to stand in solidarity with the hibakusha and their families.

The legacy of Hiroshima is one of resilience. The city we see today, this bustling metropolis, is testament to that fact. You, the people of Hiroshima, are not only brave survivors of the atomic bomb, but courageous activists for peace and reconciliation.

I offer my sincere thanks to the hibakusha and the people of Hiroshima for their decades of dedication to educating the world about the threat nuclear weapons pose to our global, national and human security.

The world needs your continued moral leadership. After decades of momentum towards the shared goal of a world free of nuclear weapons, progress has stalled.

Tensions between nuclear-armed states are rising. Nuclear arsenals are being modernized and, in some cases, expanded.

The adoption of the Treaty on the Prohibition of Nuclear Weapons last year demonstrated the international support that exists for a permanent end to the threat posed by nuclear arms, as well as frustration at the slow pace of achieving this goal.

World leaders must return to dialogue and diplomacy, to a common path towards the total elimination of nuclear weapons and a safer and more secure world for all.

This is the background for my new initiative on disarmament. My disarmament agenda, Securing Our Common Future, released in May, seeks to strengthen disarmament as a practical tool that enhances international peace and security.

It cannot replace governments' responsibilities; but it seeks to foster dialogue, create space for new ideas and find common ground. While its focus is on all weapons, it recognizes that nuclear weapons pose a threat to our very existence. Nuclear disarmament therefore remains our priority.

On this day, as we remember the tragic victims of nuclear weapons, I reiterate my firm commitment to working with the hibakusha, citizens of Hiroshima, and all peoples of the world to realize our common vision of a world free of nuclear weapons."