Everglades National Park in Florida, USA, has almost entirely reopened to the public following damage from Hurricane Katrina, which passed directly over the Park bringing heavy wind and rain.

Most of the park remained closed in the days following the hurricane due to damage to the visitor complex at Flamingo, 40 miles (64 km) southwest of Park Headquarters. Employee housing, the sewer system, the concessions marina and the boat fleet suffered significant damage. Other effects of the storm include erosion of shore lines, floating and submerged debris, shifting of bottom sands and missing navigational signs, all making recreational boating and fishing hazardous.

Everglades National Park became a World Heritage site in 1979, and was inscribed on the List of World Heritage in Danger in 1993. The exceptional variety of its water habitats has made it a sanctuary for a large number of birds, reptiles and threatened species. The Park was inscribed on the Danger List partly because of the effects of Hurricane Andrew in 1992, which altered much of Florida Bay and its ecological systems, and destroyed the park’s visitor centre. Other threats to the site included encroaching urban growth, pollution from fertilizers, mercury poisoning of fish and wildlife, and a fall in water levels caused by flood protection measures. A major rehabilitation effort is currently underway with US$ 8 million budgeted for ecosystem research, the largest budget allocation ever voted for research in a park in any part of the world.

Efforts are underway to continue assessing and repairing the damage and resume full access for the public.

For more information about the current status of the park, consult http://www.nps.gov/ever/index.htm. 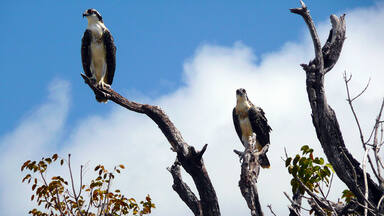