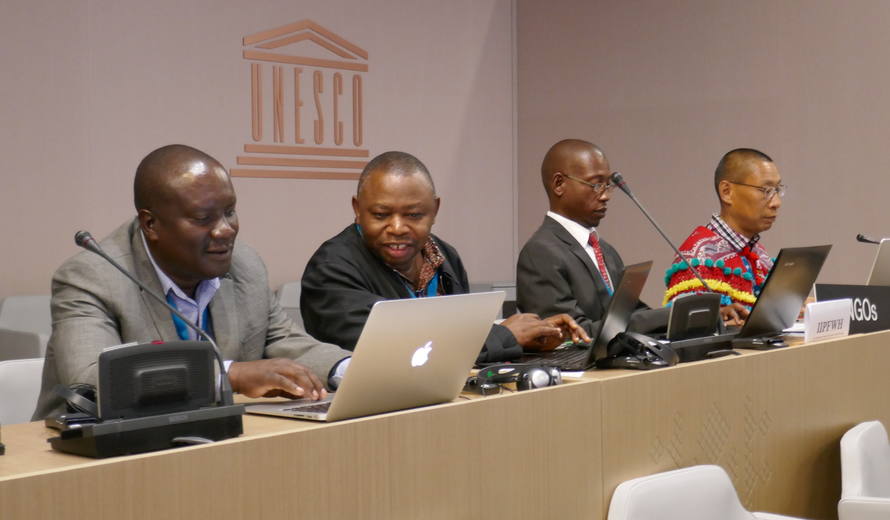 Participants at the Forum launch in Manama. © IPACC / Maria Fustic

The International Indigenous Peoples’ Forum on World Heritage (IIPFWH) was launched on 25 June 2018 during the 42nd Session of the World Heritage Committee, held in Manama, Bahrain.

“Our newly established Forum will focus on capacity strengthening for effective participation of Indigenous peoples in World Heritage processes, and we hope to establish diverse partnerships in support of that," said Leburu Andrias, Chair of the forum, in Manama. During the event, the forum representatives made an appeal to the international heritage community to support the forum’s activities.

The official website of the forum can be found at http://iipfwh.org/

“I am very glad to see that at last we witness the official launch of the Indigenous Peoples Forum,” said Mechtild Rössler, Director of the UNESCO World Heritage Centre. “Today’s launch represents a major step in the long history of indigenous peoples’ engagement in World Heritage.” The representatives of IUCN, ICOMOS, and ICCROM, the Advisory Bodies to the World Heritage Committee, also welcomed the establishment of the forum to improve the implementation of the World Heritage Convention.

The launch of the forum comes one year after the development of UNESCO’s policy on engaging with indigenous peoples as a living document, which was an outcome of the 2017 sessions of the UNESCO Executive Board.