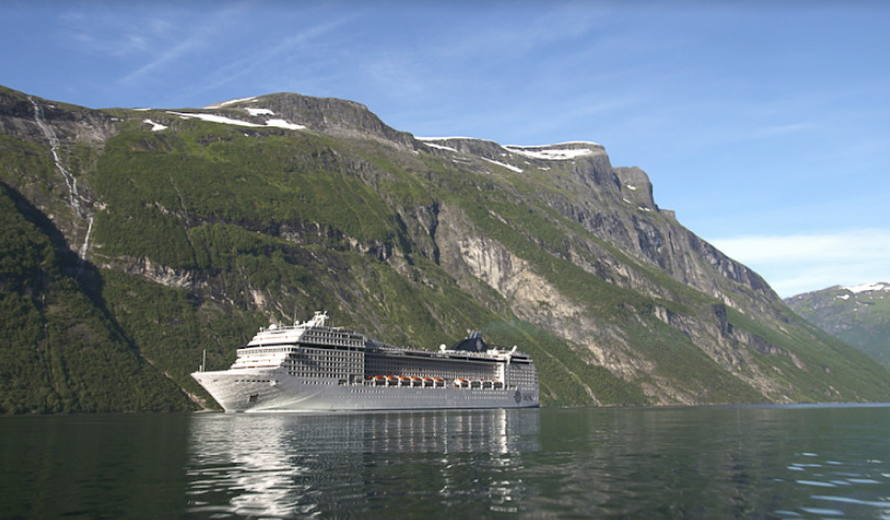 The Norwegian Parliament has adopted a resolution to halt emissions from cruise ships and ferries in the West Norwegian Fjords – Geirangerfjord and Nærøyfjord World Heritage site by 2026 at the latest. This will make the fjords among the world’s first zero emission zones at sea. The decision is expected to have a positive impact on the local population, transport and tourism, climate and broader fjord environment, as well as the maritime industry.

The starkly dramatic landscapes of Geirangerfjord and Nærøyfjord, inscribed on the World Heritage List in 2005, are exceptional in scale and grandeur in a country of spectacular fjords. Situated in south-western Norway, the fjords are among the world’s longest and deepest, and vary in breadth from just 250 m to 2.5 km wide. Fjord, a word of Norwegian origin, refers to a long, deep inlet of the sea between high cliffs formed by submergence of a glaciated valley.

The property is a popular destination for cruise ships. In 2015, nearly 180 large cruise ships made a port of call at Geiranger, and 132 ships visited Flam (Nærøyfjord). Last year, more than 300.000 cruise passenger visited the World Heritage property, which led to increased traffic and high air pollution and is increasingly considered a health hazard for the local community.

The resolution from the Norwegian Parliament builds on a 2015 decision that required all new ferry tenders to have low or zero emission technology on board of the ships. As a result, more than 60 electrical ferries are expected to go seaborne in Norway over the next few years.

"The Norwegian Parliament has adopted a brave resolution which will have a great positive impact on conserving our UNESCO World Heritage marine site. This will make the fjords the world’s first zero emission zone at sea. It is a brave policy we hope other nations and unique UNESCO World Heritage Marine Sites will adopt so that we, together with all international cruise lines, can protect our Crown Jewels of the Ocean. We invite other marine sites to join us,"  says Katrin Blomvik, director of the Geirangerfjord World Heritage Foundation.

The West Norwegian Fjords – Geirangerfjord and Nærøyfjord is an active member of the Marine World Heritage Network facilitated by the World Heritage Marine Programme. The site is currently working together with other World Heritage marine sites to exchange best practices on reducing the environmental impacts from tourism vehicles.