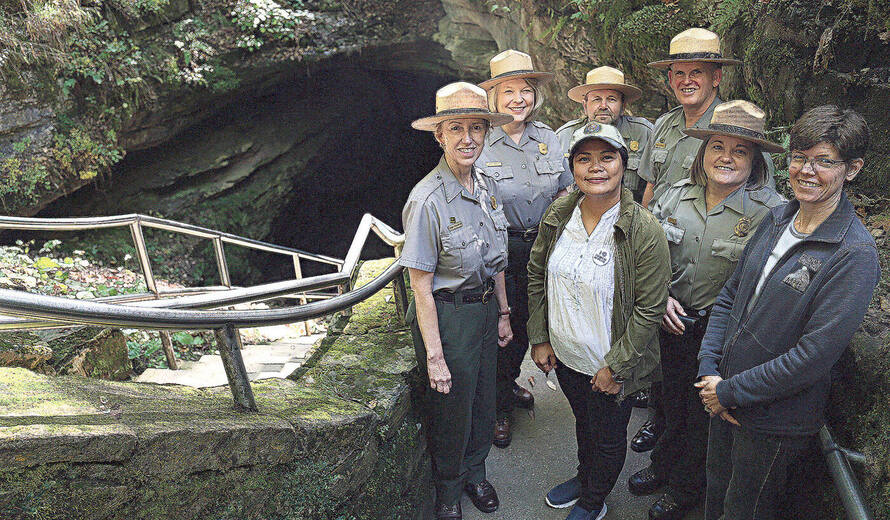 Beth Maclang, superintendent of Puerto Princesa Subterranean River National Park on the island of Palawan in the Philippines, has spent three weeks at Mammoth Cave National Park. She is shown at the historical entrance to Mammoth Cave with MNCP staff members. © Glasgow Daily Times

Beth Maclang has spent the last three weeks at Mammoth Cave National Park learning about the operation of the park. Maclang is visiting MCNP as a World Heritage Fellow. She is the superintendent of the Puerto Princesa Subterranean River National Park on the island of Patawan in the Philippines.

Like MCNP, Puerto Princesa is a national park with a cave, which opens on the ocean and the only way to tour it is by small 10-person boats.

Puerto Princesa is a United Nations Educational, Scientific and Cultural Organization World Heritage Site and lies within an international biosphere reserve. Her fellowship is being sponsored by the National Park Service Office of International Affairs in partnership with the George Wright Society.

“I’m very thankful to the National Park Service of the U.S. because Mammoth Cave is the best choice they made for me because (the two parks) have a lot of commonalities,” she said.

MCNP is also a world heritage site, and also lies within an international biosphere reserve.

“I’ve learned a lot,” she said. “Generally, my impression is all of the things that I’ve learned we will surely adopt in our park.”

Two things she found interesting about MCNP was its partnerships with the Mammoth Cave Research Foundation and Western Kentucky University.

“The main operation of our park is dependent on the revenues that we generate from the fees,” she said, adding that Puerto Princesa Subterranean River National Park does not receive funding from local or national governments, which she said can often present challenges.

She also liked that MCNP has concessions whereas her park does not.

Wednesday was Maclang’s last day at MCNP before leaving to return to the Philippines.

“It has been a great honor and pleasure to host Ms. Maclang during her fellowship here at Mammoth Cave,” said Sarah Craighead, superintendent of MCNP, in a press release. “Our focus has been to get Ms. Maclang into the cave and forest, allowing her to experience United States park management firsthand. Though there are some similarities between Puerto Princesa and Mammoth Cave, there are many differences too. Conversations with Ms. Maclang have been eye-opening for me and my staff.”