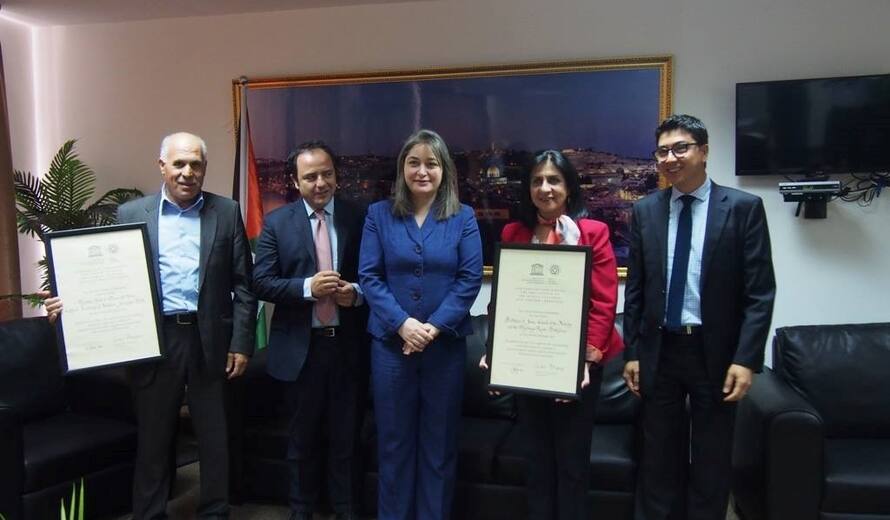 On Wednesday 20 July 2016, the Ministry of Tourism and Antiquities (MoTA) and the municipalities of Bethlehem and Battir organized an official ceremony to celebrate the inscription of the two World Heritage properties in Palestine: “The Birthplace of Jesus: Church of the Nativity and the Pilgrimage Route, Bethlehem” and “Palestine: Land of Olives and Vines – Cultural Landscape of Southern Jerusalem, Battir” on the prestigious World Heritage List.

The ceremony started at the MoTA during which the Representative of UNESCO in Palestine and Head of UNESCO Office in Ramallah, Dr. Lodovico Folin Calabi handed over the certificate of inscription of the Palestinian World Heritage properties to the Minister of Tourism and Antiquities, H.E. Rula May’a, as well to the Mayor of Bethlehem, Ms. Vera Babon and the Mayor of Battir, Mr. Akram Bader. The inscription of these properties on the World Heritage List recognises their Outstanding Universal Value and the necessity for the adequate protection, conservation and management of such exceptional sites for future generations for the benefit of all humanity, as stipulated in the Convention Concerning the Protection of the World Cultural and Natural Heritage, ratified by Palestine on 8 December 2011.

H.E Ms. Rula May’a, Minister of Tourism and Antiquities, pointed out during the ceremony that, "The inscription of the birthplace of Jesus has actively contributed to the renovation of the Nativity Church – occurring for the first time in history – and the inscription of the cultural landscape of Battir made a significant contribution to the protection of the site, mainly through the expansion of the separation wall”.

Ms. Vera Babon, the Mayor of Bethlehem, highlighted the importance of the historic and cultural heritage sites in Palestine and ensured the municipality’s commitment in the conservation and management of the World Heritage site of the Church of Nativity and the Pilgrimage Route in Bethlehem.

Mr. Akram Bader, the Mayor of Battir, thanked the Ministry of Tourism and Antiquities and UNESCO for their considerable support to Battir.

Dr. Lodovico Folin Calabi, Representative and head of UNESCO Ramallah Office, underlined the privileged and close cooperation between UNESCO and Palestine in the field of cultural heritage preservation. He  further reiterated that UNESCO is committed to  supporting Palestine in its efforts to fulfill its responsibilities within the framework of the World Heritage Convention and other cultural conventions of UNESCO ratified by Palestine.

He stated that "Heritage is our legacy from the past, what we live with today, and what we pass on to future generations. Effective conservation, management and promotion of World Heritage sites are crucial to ensure their transmission to future generations. Therefore, UNESCO will continue its financial and technical support to the relevant authorities in the safeguarding of the World Heritage sites in Palestine through the elaboration and effective implementation of a comprehensive conservation and management plan for these sites”.

In July 2012, the “Birthplace of Jesus: Church of the Nativity and the Pilgrimage Route, Bethlehem” was the first property in Palestine to be inscribed on the World Heritage List, and also on the List of World Heritage in Danger. The site is an outstanding example of an early church in a remarkable architectural ensemble, which illustrates two significant stages in human history in the 4th and 6th centuries AD. It is directly associated with the birth of Jesus, an event of outstanding universal significance. It is a strong symbol for more than 2 billion Christian believers in the world and is Holy to Christians as well as to Muslims. More information about the site is available at https://whc.unesco.org/en/list/1433.

The World Heritage property of “Palestine: Land of Olives and Vines – Cultural Landscape of Southern Jerusalem, Battir” was inscribed simultaneously on the World Heritage List and the List of World Heritage in Danger in July 2014. Battir, which is an adaptation of a deep valley system for agricultural purposes as a result of a good supply of water, is a major Palestinian cultural landscape. The complex irrigation system of the water supply has led to the creation of dry wall terraces, which may have been in use since antiquity. The agricultural terraces, exploiting this irrigation system, were the basis for a strong presence of agriculture through the cultivation of olives and vegetables. The property is an outstanding example of traditional land-use, which is representative of many centuries of human interaction with the environment. More information about the site is available at https://whc.unesco.org/en/list/1492.