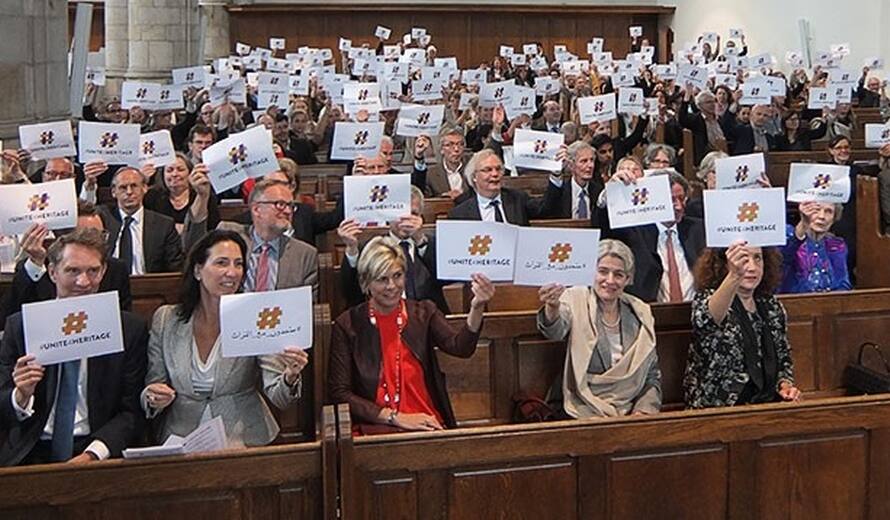 “The destruction of heritage is inseparable from the persecution of people. This is why we consider the protection of cultural heritage today as far more than a cultural issue. This has become a humanitarian imperative, and a security issue,” stated UNESCO’s Director-General Irina Bokova today in The Hague during the Europe Lecture 2016, organised by the European Lecture Foundation in collaboration with Europa Nostra and the Netherlands National Commission for UNESCO.

The event, held during the Dutch Presidency of the EU, gathered some 300 people at the Klosterklerk and was honoured by the presence of H.R.H Princess Laurentien of the Netherlands. JudgeSilvia Fernández de Gurmendi, President of the International Criminal Court, Sada Mire, a Somali Archaeologist and Researcher at Leiden University, and Sneška Quaedvlieg-Mihailović, Secretary-General of Europa Nostra, Europe’s leading heritage organisation headquartered in The Hague, contributed to this year’s Europe Lecture. The opening remarks were made by City Councilor Ingrid van Engelshoven.

In her address, Bokova classified the acts of deliberate destruction of heritage sites and “cultural cleansing”, which have taken place mainly in the Middle East and Africa, as “war crimes”. She spoke about UNESCO’s recent actions to put culture and heritage on the frontline of peacebuilding and humanitarian emergency operations; stressed the need to combine ‘hard power’ with legislative, educational and training measures to protect our shared heritage from terrorism and looting; and highlighted the close cooperation with the European Union, especially with the Netherlands.

Referring to the intentional destruction of heritage gems in Syria – namely the archaeological site of Palmyra and the Old City of Aleppo –, Libya, Yemen and Iraq, UNESCO’s Director-General affirmed:“The deliberate destruction of cultural heritage is a war crime, which is used as a tactic of war, to disseminate fear and hatred. (…) Violent extremists target culture because they know it weakens the social fabric and damages the capacity for resistance.”

Irina Bokova listed UNESCO’s recent actions to put culture and heritage at the centre of peacebuilding and humanitarian emergency operations, such as: the agreement signed with the International Committee for the Red Cross to integrate culture into humanitarian operations; the deal with Italy to establish a Task Force on Unite4Heritage, bringing together military and culture experts; and the broad coalition formed with ICOMOS, ICCROM, the World Customs Organization and the United Nations Office on Drugs and Crime to support States and strengthen legislation, introduce new laws, and bolster institutions and capacity. She also mentioned that last year’s landmark Resolution 2199 of the United Nations Security Council on the financing of terrorism, banning the trade of cultural goods from Syria, calls on UNESCO to lead this fight.

“Our efforts are bearing fruit. ‘Blood antiquities’ have been seized all across the globe, smugglers have been arrested, statues have been returned to Iraq, to Libya, to Egypt, to Syria,” said Bokova. The first suspect of the destruction of the Mausoleums of Timbuktu in Mali has been transferred to the International Criminal Court in The Hague and the trial should take place during this summer. “This sends a resounding message against impunity, including today in Syria and Iraq,” noted UNESCO’s Director-General.

Irina Bokova also championed the role of education, training and communication to build bridges between countries, cultures and peoples. “‘Hard power’ is not enough to prevent violent extremism. We must engage young people – we must teach them about the values of heritage, explain why it is important – we need to win this battle of ideas too. This is the spirit of the campaign #Unite4heritage.”

In her address, UNESCO’s Director-General singled out the effective cooperation with the European Union. She referred to UNESCO’s high-level Conference on the ‘Protection of Heritage as a Force for Resilience and Peacebuilding’ held on 9-10 June in Brussels and welcomed the adoption of the EU’s New Strategy on Cultural Diplomacy, highlighting the strong vision that culture and heritage are at the centre of international relations, on 8 June.

“The Netherlands is a longstanding champion for UNESCO – a vital partner in its action to protect cultural heritage, especially during armed conflict,” Bokova stated, recalling that the 1954 ‘Convention for the Protection of Cultural Property in the Event of Armed Conflict’ and its two Protocols were adopted in The Hague. More recently, in 2015, immediately after the adoption of United Nations Security Council Resolution 2199, the Netherlands was one of the first countries to share its counter measures with UNESCO – including an education programme for Customs and Police throughout the country. “I wish to praise the ‘Heritage Act’ adopted by the Netherlands this year as an example to be followed by other UNESCO Member States. This leadership has never been so important,” concluded UNESCO’s Director-General.

Reacting to Bokova’s speech, Judge Silvia Fernández de Gurmendi, discussed how the International Criminal Court (ICC) can contribute to the protection of cultural heritage by making personally accountable those involved in its destruction. She recalled that the ICC’s Rome Statute explicitly provides that intentional attacks against religious buildings and historic monuments may constitute war crimes and allows the Court to prosecute such acts. The ICC is currently hearing a war crimes case involving allegations of attacks against nine mausoleums and a mosque in Timbuktu, Mali. "if we can accept cultural diversity in our past, we'll be able to accept cultural diversity in our present", declared archeologist Sada Mire.

“More needs to be done to enlarge participation in the Rome Statute and enable the ICC to investigate and prosecute the most serious crimes wherever they occur, including the destruction of cultural property. We need States, civil society and organisations to all work together to underline the importance of justice and the rule of law in protecting the common heritage of humankind”, the ICC President said, thanking UNESCO and the United Nations for their invaluable support of the Court.

Referring to two important initiatives announced by the European Commission this semestre, the EU’s New Strategy on Cultural Diplomacy and the proposal to hold a European Year of Cultural Heritage in 2018, Europa Nostra’s Secretary General Sneška Quaedvlieg-Mihailović emphasised: “These two initiatives represent true milestones for Europe and for its relationship with the rest of the world. They recognize that cultural heritage is a strategic resource for Europe, both for EU’s internal policies and for EU’s external relations. They also provide a suitable platform for European and international institutions, together with various public bodies and civil society, to join forces; to respond in a positive and effective way to so many challenges which our heritage faces, not only in times of conflict, but also in times of peace.

“Together with our President, Maestro Plácido Domingo, who is also UNESCO Goodwill Ambassador, Europa Nostra and our wide network of committed organisations and individuals stand ready to contribute to this vital process,” noted Sneška Quaedvlieg-Mihailović, who moderated the Europe Lecture 2016.