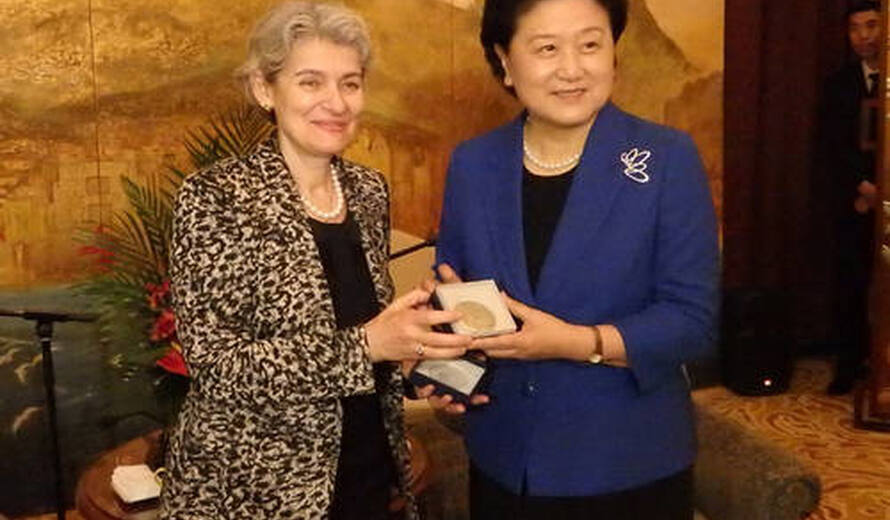 Director-General of UNESCO, Irina Bokova and the Vice Premier of the People’s Republic of China, Ms Liu Yandong (22/05/2015)

The Vice Premier of the People’s Republic of China, Ms Liu Yandong, pledged her country’s ambition to push her Government’s broad collaboration with UNESCO “to new heights” during a meeting with Director-General Irina Bokova in Qingdao on 23 May, on the eve of the International Conference on ICTs and post-2015 Education.

On behalf of the Chinese Government, Ms Yandong congratulated UNESCO on the occasion of its 70th anniversary, affirming that “in the past seven decades, UNESCO has abided by principles of justice, fairness and peace, to carry out actions in education, culture, science and information. “

She referred to a series of joint events in recent years that testify to China’s vibrant collaboration with UNESCO, including conferences on Culture and Development in Hangzhou, technical and vocational skills in Shanghai, languages in Suzhou and Learning Cities in Beijing, together with the historic visit of President Xi Jinping to UNESCO in March 2014. She stated that the global conference on ICT and post 2015 education in Qingdao that opens on 24 May will become yet another important outcome of this collaboration.

The Director-General expressed strong appreciation for this collaboration and underlined the significance of the Funds-in-Trust programme that is strengthening education systems in Africa and carrying positive impact.  Coming right after the World Education Forum in Incheon (Republic of Korea) that adopted a new vision for education for the next 15 years, the Conference in Qingdao marks a direct contribution to the advancement of learning, especially in the most challenged contexts.

Recalling President Xi Jinping’s address at UNESCO showcasing the importance of culture and diversity for mutual learning among civilizations, together with joint conferences, relations with prestigious universities, creative cities and Category II institutes, she observed that this cooperation is reaching an unprecedented level. She also conveyed pride in the decision of First Lady Professor Peng Liyuan to become a UNESCO Special Envoy for the Advancement of Girls’ and Women’s Education.

The Vice Premier expressed hope that UNESCO and China could jointly promote dialogue among Asian civilizations, with a focus on youth engagement, building on the Organization’s work to strengthen cultural diversity and dialogue among cultures and upon President Xi Jinping’s initiative to bring new life to the Silk Road Economic Belt and the Maritime Silk Road.  She said this initiative will encompass over 60 countries in the region and play an active role in promoting collaboration on the economic and cultural fronts, and through encouraging people-to-people exchange. The Vice Premier said that China stands ready to enhance collaboration with UNESCO to protect the cultural heritage sites of the Silk Road and to promote both cultural exchange and the inscription of new sites along it.

The Director-General welcomed this dialogue, noting the need for a stronger messages on tolerance and peace and more understanding in the face of young people falling into violent extremism.