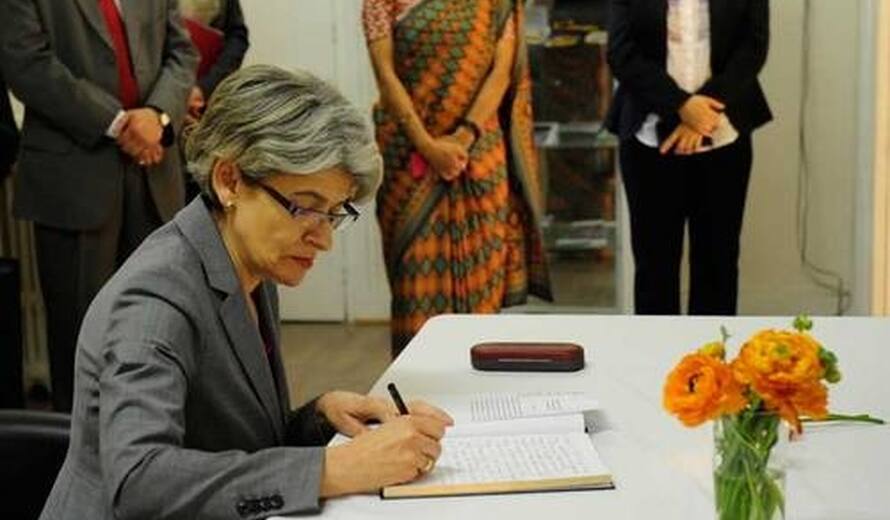 On 6 May, the Director-General expressed her sincere condolences to the Government and people of Nepal in the aftermath of the devastating earthquake that struck the country on 25 April by signing a message in the condolences book opened at the Embassy, in the presence of the Ambassador and Permanent Delegate to UNESCO, Ms Ambika Devi Luintel.

“I wish to say how deeply aggrieved I am by the magnitude of human loss caused by the earthquake. I am also shocked by its devastating impact on the unique cultural heritage in the country, in particular extensive and irreversible damage at the World Heritage site of Kathmandu Valley. I have visited these Temples and beautiful squares and I was deeply moved by the deep connection between the people and its heritage. I wish to state clearly that UNESCO stands with Nepal and will do everything in its power to help Nepal rebuild and return to normality, drawing on the power of education, science and culture.”

Ambassador Luintel showed the Director-General photographs of the extensive damage to cultural heritage, with entire structures reduced to rubble in the Durbar Squares of Hanuman Dhoka (Kathmandu), Patan and Bhaktapur, which are part of the seven groups of monuments of the Kathmandu Valley World Heritage Site. UNESCO is currently preparing to field an international expert mission to undertake an in-depth damage assessment and, based thereon to advise and provide support to the Nepalese authorities and local communities on its protection and conservation.

The Earthquake has claimed over 7,000 lives and affected more than 8 million people.