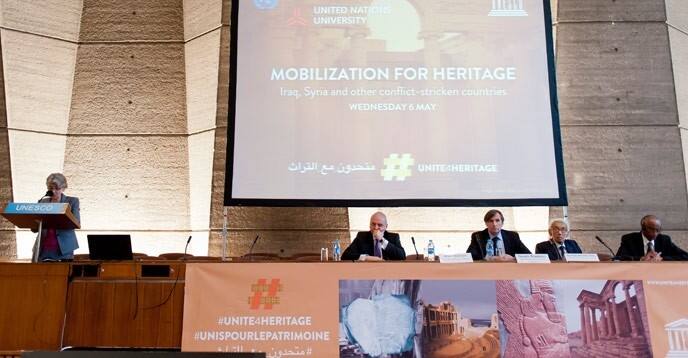 "Never in the course of recent history have we known such deliberate, systematic and brutal destruction of cultural diversity and heritage," said UNESCO Director-General Irina Bokova in her opening address. "The attacks against Mesopotamia, which gave us writing, the wheel, the rule of law, are an attempt to obliterate the cradle of civilization and our common humanity,” she added.  “The destruction is clearly part of a global strategy of cultural cleansing […] It accentuates the disintegration of societies and spreads like a plague in other countries such as Mali, Libya and Yemen. We must respond to these architects of hate who are hijacking history, and make heard another message:  that these are not stones and buildings, but values and identities.”

Taking the floor, former UN Secretary-General Boutros Boutros-Ghali, denounced the destruction perpetrated by Daesh in Iraq’s Mosul Museum, at the historic city of Nimrud and the World Heritage site of Hatra.  "Extremists wish to eradicate everything that does not match their religious vision,” he said. Boutros Boutros Ghali called for the "mobilization of all forces opposed to such destruction’ since "it is in the field of culture that our common destiny is expressed".

French writer Daniel Rondeau, representative of the United Nations University at UNESCO and former French ambassador to the Organization and Malta, denounced the "scorched earth" policy of the fundamentalists, as evidenced by their cultural cleansing, looting and pillaging.

"UNESCO offers a unique forum for debate against destruction and hatred. We must use that space."