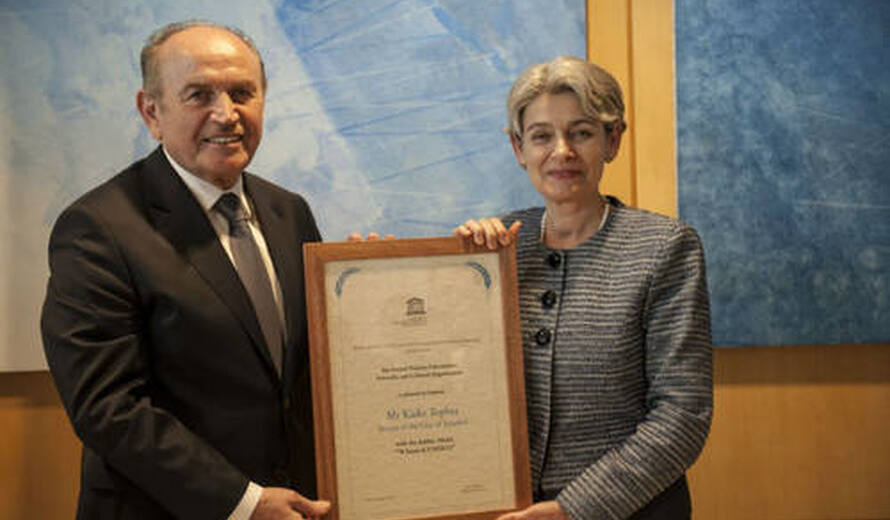 H.E. Mr Kadir Topbas, Lord Mayor of Istanbul, visited UNESCO on the occasion of the Organization’s 70thanniversary, coinciding with the 30th anniversary of the inscription of the Historic Areas of Istanbul on the World Heritage List.

On the occasion of his visit to UNESCO, the Lord Mayor of Istanbul participated in a round-table on heritage conservation in the face of the challenges of urban development and the pressures of demographic growth in mega-cities. The round-table was followed by a photographic exhibition on the “Spirit of Istanbul”, presenting the major landmarks of the historic areas of Istanbul, as well as a Gala concert “voices of Istanbul," featuring notably a Mawlawi Sufi ceremony.

Congratulating the Mayor for this landmark anniversary, the Director-General recalled that "the universal outstanding value of Istanbul resides in its unique integration of architectural masterpieces that reflect the crossroads of European and Asian cultures over many centuries".

She commended Turkey for the “great efforts it has made towards the preservation of the cultural heritage of the city and recalled that conservation and urban development are fully compatible." "In this respect," she continued, "UNESCO provides an extraordinary platform for international cooperation through which good practices and experiences can be shared.”

"Istanbul is emblematic for many civilizations. It sends a strong message to the world, in particular at this troubling period when we are witnessing the destruction of invaluable cultural heritage, ranging from temples, to mosques and churches in many parts of the world," declared Irina Bokova.

Thanking the Director-General for her support and for the excellent cooperation between Turkey and UNESCO --in particular, the fruitful collaboration which the city of Istanbul has established with UNESCO -- Mr Topbas underscored that "culture brings people together and should be put forth as a common language of humanity everywhere in the world". He underlines the need to "preserve not only the buildings but also the lifestyles that the buildings house through a multidimensional approach.”

In recognition of his personal contribution to the conservation of cultural heritage, the Director-General presented the Mayor with a UNESCO certificate as well as the UNESCO Special Medal for the 70th anniversary of the Organization.