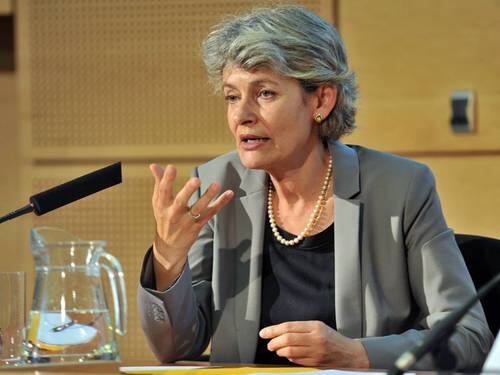 UNESCO Director-General Irina Bokova today condemned the deadly attack at the Bardo Museum in Tunis, and expressed her support and solidarity with Tunisia and the families of the victims. Ms Bokova spoke of the assault during a meeting with French President Francois Hollande at the Louvre Museum in Paris. The two leaders were addressing media on the destruction of cultural heritage by extremist groups.

“Tunisians, and especially young Tunisians, sought and accepted the challenge of democracy,” she continued. “The country represents an immense hope for all of the peoples of the world. We must get  the message across that democracy  is transmitted through culture, through dialogue.”

“Confronted with those who seek to choke off human spirit by violence and terror, we must respond by dialogue, culture and respect for human rights. In the name of these values, which link us together, I wish to affirm UNESCO’s total determination to support the Tunisian people.”