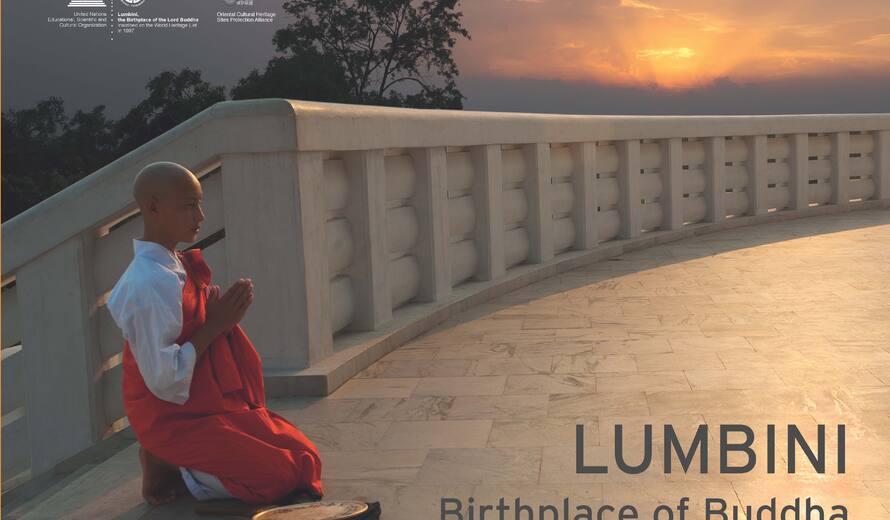 A joint publication of UNESCO and the Paris-based NGO Oriental Cultural Heritage Sites Protection Alliance, Lumbini, Birthplace of Buddha is a novel approach at encapsulating this site’s timeless essence.  Eight photographers – three Nepali and five from around the world – used their unique vision to capture the Sacred Garden experience and, in the tradition of pilgrims past, share its message of harmony to all peoples, regardless of religion.  The result is a collection of over two hundred photographs depicting seven distinct themes that have been translated into four different languages: Nepali, Chinese, English and French.  The seven themes are heritage, knowledge, beliefs, people, nature, spaces and dangers. Each theme is introduced by a short text written by national and international personalities affiliated with Lumbini. Lumbini, Birthplace of Buddha  will have its national launch in Kathmandu on 31 October, 2013, followed by a planned international unveiling at the U.N. Headquarters in New York in the spring of 2014.

Lumbini, set in the fertile plains of Nepal’s Terai region, is universally regarded as the place where Buddha was born.  As one of the most sacred sites significant to Buddha’s life and path to enlightenment, the Sacred Garden of Lumbini has been a center of pilgrimage for devout followers from as early as the 3rd century B.C.  Emperors and historians from distant lands have paid their respects to this hallowed site and commemorated their visits with literature that has ensured the passing of Gautama Buddha’s story down through the generations. Lumbini was inscribed on the World Heritage List in 1997 as the birthplace of the Lord Buddha, testified by the inscription on the Emperor Ashoka Pillar, and the archaeological remains of the Buddhist viharas and stupas from the third century BCE to the fifteenth century CE, provide important evidence about the nature of Buddhist pilgrimage centres from a very early period. Ramagrama, the relic stupa of Lord Buddha, and Tilaurakot, the archaeological remains of ancient Shakya Kingdom where the Lord Buddha lived as prince until age 29, are two other sites in the vicinity of Lumbini that are closely related to Lord Buddha’s life. These two sites were included by Nepal in the World Heritage Tentative List in 1996.