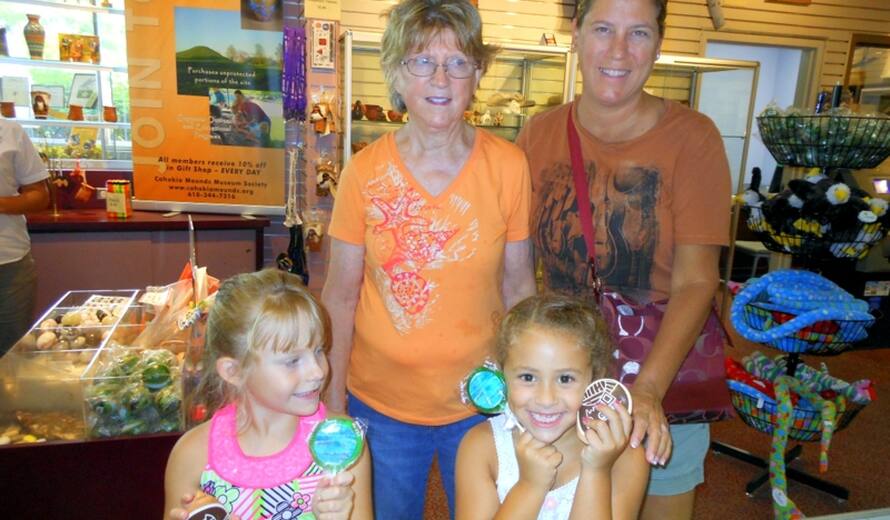 Cahokia Mounds State Historic Site on Tuesday welcomed its 10 millionth visitor since achieving the rare distinction of being designated a World Heritage site.

Visitor N° 10,000,000 was Michelle Miller of Waterloo, Ill. She was accompanied by her mother, Lorraine Novak; daughter Gabrielle Miller; and her daughter’s friend Keira Schmitz. Miller received a personal tour of the site and a $100 gift certificate from the Cahokia Mounds Museum Society.

Cahokia Mounds was inscribed on the World Heritage List in 1982 in recognition of its unique role in history. The site once served as the civil and religious center of the sprawling Mississippian Culture. Thousands of people fished, farmed, worshipped and traded with other cultures. The site is dotted with mounds – including 10-story Monks Mound – that Native Americans built for burials, religious ceremonies and other activities. After its inscription on the World Heritage List, it took Cahokia Mounds five years to reach its one millionth visitor. It hit five million after 16 years and 10 million after 31 years.

“Walking and climbing among the mounds helps visitors connect with a civilization that resembles our own in some ways and yet was very different. It’s a unique experience,” said Amy Martin, director of the Illinois Historic Preservation Agency. “No wonder it attracts people like the Millers and others from across the world.”