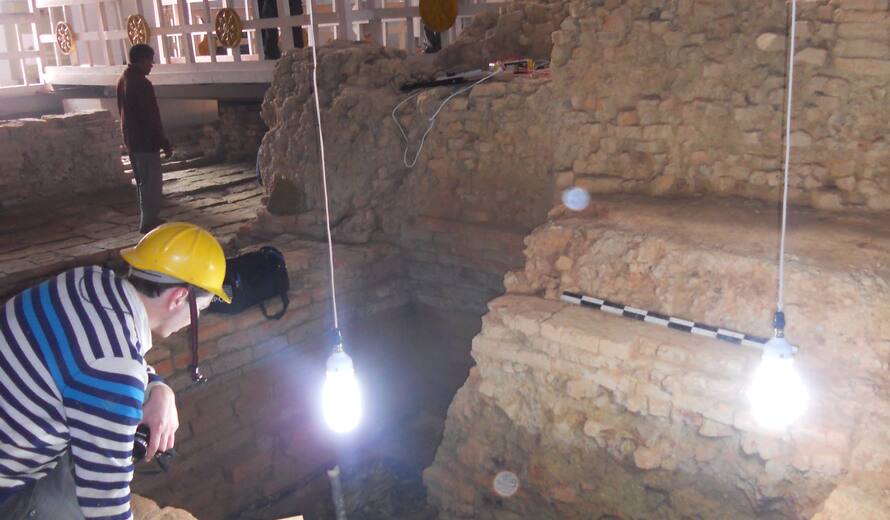 New excavations within the Maya Devi Temple of Buddha’s birthplace in Lumbini, Nepal, have revealed evidence of a series of shrines extending the history of the site to a much earlier date than previously known.

Until now, the earliest Buddhist temples have been attributed to Emperor Ashoka, who in the 3rd century BC spread Buddhism across the region, as evidenced by his Pillar and brick built temple in Lumbini, a UNESCO World Heritage property since 1997.

“For the first time in South Asia, excavations have revealed a pre-Ashokan temple of brick, which itself was built over an earlier one of timber”, says Professor Robin Coningham of Durham University in UK, who co-directed a team of Nepali and international experts together with Kosh Prasad Acharya, at a press conference in Kathmandu today.

The team worked with the framework of a UNESCO project funded by the Government of Japan through the Japanese Funds in Trust for the Preservation of the World Cultural Heritage to UNESCO.  The first phase of the project was completed this month in Lumbini in Southern Nepal.

Coningham also said that even older remains of a village dating back to as early as 1300 BC were found a few hundred metres south of Lord Buddha’s birthplace, pushing the date of the settlement of the region back by a thousand years.

“These two discoveries are great steps which help us to better understand the origins of Lord Buddha’s life and the spiritual importance of Lumbini”, says Acharya Karma Sango Sherpa, the vice-chair the Lumbini Development Trust that looks after the preservation and management of the site.

“We have now very robust proof that Lumbini’s history extends far before the visit of Emperor Ashoka.  The government of Nepal will step-up its efforts to preserve the outstanding universal value of the site”, says Sushil Ghimire, Secretary of the Ministry of Culture, Tourism and Civil Aviation.

“Japan is honoured to have been able to contribute to the success of this flagship project”, says H. E. Kunio Takahashi, the Ambassador of Japan to Nepal.

The project has produced a number of other significant results.  It has enhanced the conservation of the three most emblematic monuments of Lord Buddha’s birthplace, namely the Marker Stone, the Nativity Sculpture and the Ashoka Pillar.  It has established an operational plan for the implementation of the Kenzo Tange Master Plan for the Sacred Garden and confirmed the continuous relevance of the Plan. It has established a comprehensive management framework for the property.  And it has increased the capacity of national experts and institutions to manage the site.

The project has demonstrated that the preservation and management of the World Heritage property of Lumbini cannot be isolated from the management of the rich cultural landscape of the greater Lumbini area.  Therefore a second phase of the project extending the scope of just completed project, is expected to begin shortly.