UNESCO and Panasonic Corporation announced the renewal of their strategic partnership agreement today. The new agreement will run for two years from June 2013 to May 2015.

The strategic framework agreement was signed by UNESCO Director-General, Ms. Irina Bokova and Senior Managing Executive Officer of Panasonic Corporation, Mr. Takumi Kajisha, on June 18, 2013, in Phnom Penh in the Kingdom of Cambodia, on the occasion of the 37th session of the World Heritage Committee. The partnership aims to raise awareness about the conservation of UNESCO World Heritage sites and to promote environmental education for the next generation through the World Heritage Education Program. Through this partnership, Panasonic has promoted joint programs in the fields of ‘education for the next generation’, ‘communication’, and ‘technological support’ over the past two years (June 2011 to May 2013). Following the renewal of the partnership agreement, Panasonic plans to further actively promote and develop these programs in the future.

“UNESCO’s work with Panasonic is an example of partnership for innovation, through collaborative, on-the-ground actions that are essential for the preservation of our Planet.”

Regarding the renewal of the strategic partnership, Takumi Kajisha, Senior Managing Executive Officer of Panasonic Corporation, said, “Two years have passed since the start of the partnership, created through the matching of UNESCO’s commitment to the conservation of the environment and the next generation, and Panasonic’s corporate vision, which values sustainability, and its commitment to contributing to people’s daily lives, to society and to the next generation throughout the world. The various activities being carried out through this partnership have achieved great results and are becoming well established. Through our partnership with UNESCO, we will continue to contribute to society throughout the world.”

In 2012, the World Heritage Eco Learning Program was held at the following locations:

In addition, the company has also held the ‘Eco Diary Picture Contest’, a contest where children introduce their own unique global environmental conservation activities in the form of a picture diary. Originally stared in 2008 in Japan, the program has grown globally, and has been held in 51 different countries and regions around the world, with the participation of approximately 300,000 children. Global award ceremonies have also been held in partnership with UNESCO, at the UNESCO headquarters in 2011, and at Nijō Castle in Kyoto, Japan, in 2012.

In the coming two years, the ‘World Heritage Eco Learning Program’ will be hosted at World Heritage sites in more than ten countries, including Cambodia, Spain, and Brazil, while other programs, such as the ‘Eco Diary Picture Contest’, will be further developed.

In the field of ‘communication’, Panasonic has worked in partnership with the National Geographic Channel to present a World Heritage-focused television program called ‘THE WORLD HERITAGE SPECIAL’. Since the start of the program in June 2011, it has been broadcast in 193 countries and regions (440 million households) around the world.

Panasonic has signed up to continue sponsoring the ‘THE WORLD HERITAGE SPECIAL’ with the National Geographic Channel for a further two years.

Finally, in the field of ‘technological support’, in addition to supplying its audiovisual equipment to the UNESCO Headquarters, Panasonic has also supplied its latest 3D technology with ‘Dive into World Heritage 3D’, a 3D system which allows the viewer to experience the World Heritage sites as if they were there, and has also provided media training in recording and editing techniques to young volunteers engaged in World Heritage preservation. In addition, the company has also established a project to replace incandescent light bulbs with energy-saving LED lights at World Heritage sites in Japan, including Shirakawa-Go in Gifu Prefecture, Kiyomizu Temple in Kyoto, and Itsukushima Shrine in Hiroshima, as well as other World Heritage sites around the world, such as the Hradcani Castle in Prague, Czech Republic.

Over the next two years, Panasonic will provide its audiovisual systems, such as its High Definition Video Communication system, and other audiovisual equipment to the UNESCO headquarters and field offices. The company will also donate its solar lanterns to regions without electricity, and continue its efforts in the replacement of incandescent light bulbs with LED lights at World Heritage sites around the world. In addition, Panasonic has been producing the World Heritage Calendar since 1995, and since Fiscal Year 2011 (ending March 2011), has been distributing a World Heritage Calendar application for computers, smartphones and tablets. This application has been distributed to approximately 9,000 UNESCO associated schools in 180 countries worldwide as an educational tool.

Through this strategic partnership agreement, Panasonic and UNESCO will continue to contribute to the conservation of World Heritage sites and the preservation of the environment, as well as to the education of the next generation. 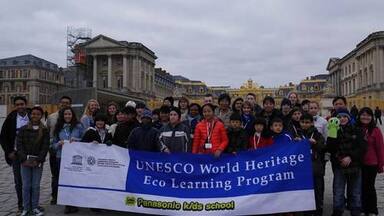 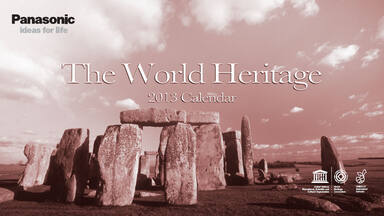