The Mayan town of Uxmal, in Yucatán, was founded c. A.D. 700 and had some 25,000 inhabitants. The layout of the buildings, which date from between 700 and 1000, reveals a knowledge of astronomy. The Pyramid of the Soothsayer, as the Spaniards called it, dominates the ceremonial centre, which has well-designed buildings decorated with a profusion of symbolic motifs and sculptures depicting Chaac, the god of rain. The ceremonial sites of Uxmal, Kabah, Labna and Sayil are considered the high points of Mayan art and architecture. 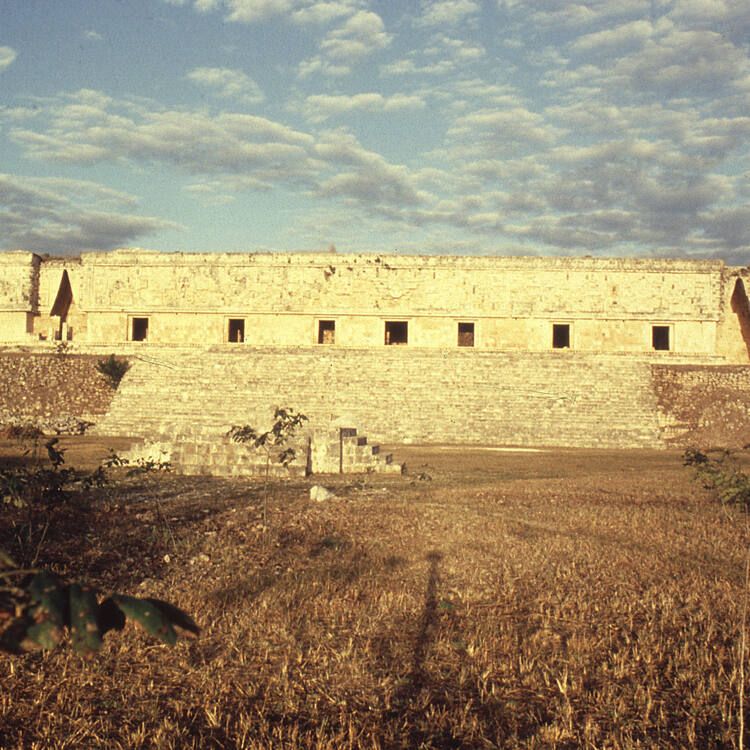 Monuments of the city, Uxmal © UNESCO

The ruins of the ceremonial structures at Uxmal represent the pinnacle of late Maya art and architecture in their design, layout and ornamentation, and the complex of Uxmal and its three related towns of Kabah, Labná and Sayil admirably demonstrate the social and economic structure of late Maya society.

The archaeological site of Uxmal is located 62 kilometers south of Merida, forming the centre of the Puuc ("hill" or "chain of low mountains") region which covers some 7500 km2 in the south-western part of the Mexican state of Yucatan. The region was a centre for trade and the exchange of ideas - and probably also people - with other parts of Mexico.

The 16th century A.D. Maya history known as The Books of Chilam Balam dates the foundation of Uxmal to the later 10th century A.D. Archaeological investigations and radiocarbon dating suggest that the main structures in the complex, including a series of hydraulic works, such as reservoirs for storing rainwater (the chultunoob), were built between the 8th  and 10th century A.D. During this period Uxmal grew from a peasant town into a political and administrative centre with up to 20,000 inhabitants. The existence of a town wall reflects a situation of conflict, probably due to the strengthening of other urban centres that eventually contested Uxmal's control of the region; Uxmal was abandoned by its inhabitants after the 10th century A.D. and became no more than a place of pilgrimage until the conquest by the Spanish.

Unlike most other prehispanic towns, Uxmal is not laid out geometrically. Its space is organized in relation to astronomical phenomena, such as the rising and setting of Venus, and adapted to the topography of the site, made up of a series of hills. The main characteristic of Puuc architecture is the division of the facades of buildings into two horizontal elements. The lower of these is plain and composed of carefully dressed blocks broken only by doorways. The upper level, by contrast, is richly decorated with symbolic motifs in a very plastic style; the individual blocks make up a form of mosaic. There are sculptures over the doorways and at the corners of the upper level, almost invariably composed of representations of the head of Chaac, the rain-god.

Some of the most important buildings at the site are the Pyramid of the Soothsayer, the Quadrangle of the Nuns, the Governor's Palace, the House of the Tortoises, the Ball Court, as well as the still not extensively investigated Southern Complex, which includes the Great Pyramid and the Pigeon House.

Important buildings at the other sites are the Palace at Sayil, and the Gateway Arch at Labná. Kabah, which in the region is only second to Uxmal in size and connected to the latter by a sacbe or raised causeway, has the Palace of the Masks or Codz Pop. However, investigation at these sites is still in its beginnings and holds great potential for the future.

Criterion (i) : The ruins of the ceremonial structures at Uxmal, Kabah, Labná and Sayil represent the pinnacle of late Maya art and architecture in their design, layout, and ornamentation.

Criterion (ii) :  The richness of the iconography in Uxmal´s buildings is a tangible expression of the complex Maya cosmogony and of the intimate relation they held with their environment. The art and architecture at Uxmal and its neighbouring sites furthermore bears witness to the migration of styles from the Rio Bec and Chenes region, as well as from central México.

Criterion (iii) : The greatness of the monuments and the magnificence of the architectural styles found at Uxmal reveal the importance of this city as a capital for economic and socio-political development of the prehispanic Maya civilization. The complex of Uxmal and its three related towns of Kabah, Labná and Sayil admirably demonstrate the social and economic structure of late Maya society before it disappeared in the Terminal Classic Period.

Due to the region's remoteness and sparse population, the monuments, especially at Labná and Sayil, are still very well preserved. This becomes evident when comparing the buildings with photos and drawings from the late 19th and early 20th century.

The earliest reports on the state of conservation and on cleaning and protection work at Uxmal were produced in 1913 and 1914. Systematic archaeological work began in 1940, carried out by US archaeologists, and has continued since that time, carried out by Mexican specialists in association with conservation and restoration activities. Work on reforestation and tidying up of the whole area has also been in progress over recent years. A new system of signage has been introduced and the museum was set up in 1986, along with better parking facilities.

Conservation activities at Uxmal have respected and incorporated original materials such as lime, and made use of advanced technological resources in order to preserve the original majesty of the buildings, and assure structural and decorative precision of the restorations. Vaults and walls that were damaged by time and climatic conditions were re-erected. However, the work carried out over some seventy years at Uxmal has been confined to consolidation and anastylosis, well within the parameters laid down in the 1964 Venice Charter.

The 1972 Federal Law on Monuments and Archaeological, Artistic, and Historical Zones establishes public ownership of all archaeological properties, even if these are situated on privately owned lands. This applies in the case of the Hacienda Uxmal, where part of the archaeological zone is located. The buffer zone is defined by the decree of 1994. Part of the buffer zone is owned by the Municipality of Santa Elena, but the major part belongs to the privately owned Hacienda Uxmal.

Management of the heritage aspects of the site is carried out by the Yucatan Regional Centre of the National lnstitute for Anthropology and History (INAH). Matters relating to land-use, urban development and the environment are the concern of the Ministry of Social Development (SEDESOL).

There is an INAH staff of 22 people at Uxmal, responsible for guardianship and maintenance work. Research and conservation is carried out by specialists from the Regional Centre at Merida. The SEDESOL Regional Centre is also involved in land-use and environmental aspects of management. The Cultural lnstitute of the State of Yucatan is responsible for the management of the site museum and its service unit, established in 1986 with a permanent staff of 25 employees. There is no specific management plan for Uxmal, because it was considered that the lack of threat from, for example, urban development meant that normal INAH maintenance and research programmes constituted adequate provisions. However, the authorities now consider it a matter of priority to establish a management plan for Uxmal and the Ruta Puuc. As a part of this plan it is considered important to unite the efforts of all three levels of government and to offer opportunities for capacity building for a new generation of professionals in the area of architecture and restoration. An important aspect to be considered in this context is the inclusion of social and environmental perspectives that will help to preserve social sustainability as well as cultural and natural resources of the sites, as a legacy for future generations.