The List White Monuments of Vladimir and Suzdal
Print

These two artistic centres in central Russia hold an important place in the country's architectural history. There are a number of magnificent 12th- and 13th-century public and religious buildings, above all the masterpieces of the Collegiate Church of St Demetrios and the Cathedral of the Assumption of the Virgin. 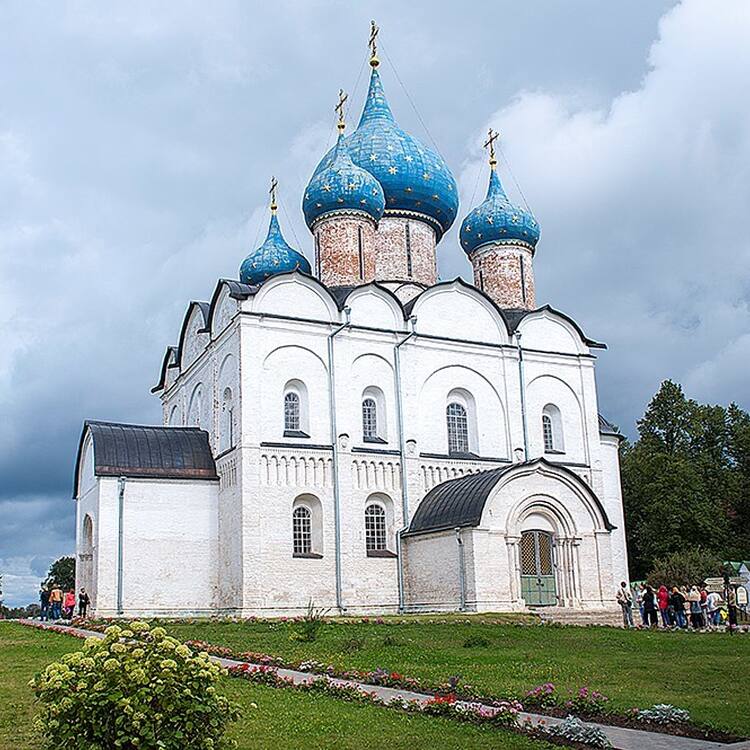 The ancient towns of Vladimir and Suzdal, the main towns of the ancient Russian principality in the 12th-13th centuries, are located in the centre of the European part of Russia, some 200 km east of Moscow, 30 km from each other. At this time, the towns developed their individual architecture and art school. These white-stone monuments are unique architectural creations, and part of the Russian treasure-house of culture.

The World Heritage property “White Monuments of Vladimir and Suzdal” is a serial property, made up monuments in Vladimir, Suzdal and Kideksha, five km to the east of Suzdal. In Vladimir are found the Cathedral of the Assumption, the Golden Gate, the Cathedral of the Nativity of the Virgin and the Staircase Tower of the Palace of Andrei Bogulyubsky in the Prince Castle in Bogulyubuvo, and the Church of the Intercession on River Nerl; the Kremlin and Cathedral of the Nativity and the Monastery of Our Saviour and St Euthymius are in Suzdal; and the Church of St Boris and St Gleb stands in Kideksha.

In Vladimir, the Cathedral of the Assumption (1158) was intended to be the religious centre of all Russia. It was built in the town Kremlin with three naves surmounted by a delicate drum and a helmet dome. Divided into five sections by embedded columns, the facade is notable for its carved reliefs. Most of the 12th-century frescoes were destroyed by Mongols in 1238, but new mural paintings were added in 1408 by the master painters Andrei Rublev and Daniil Chernii, in particular the famous “Last Judgment.” The iconostasis is a fine Baroque example of 1774.

The Golden Gate (1164) forms part of the 12th-century defences, now demolished. It is a cubic tower with a church dedicated to the Deposition of the Holy Robe on top. The Princely Castle at Bogolyubovo (1165) contains the remains of the 12th-century Royal Palace, in the form of the Cathedral of the Nativity of the Virgin and the Staircase Tower of Andrei Bogolyubskii. The cathedral is a 17th-century building on the site of the original structure. The Church of the Intercession (1165) on the Nerl River is located opposite the original river gate of Vladimir. It has a single dome at the crossing and reliefs on the upper part of the exterior walls.

The Cathedral of St Demetrius (1194-97) is a royal church, cubic in form, with three internal naves and a helmet dome. The exterior has over a thousand stone carvings on the general theme of King David. 12th-century frescoes survive in the western part of the interior.

In Suzdal, the Kremlin (fortress) is surrounded by earthen ramparts. Within, dominating the whole town, stands the Cathedral of the Nativity, built in the 13th century and reconstructed in the 16th century, with its five-domed roof and 13th-century Golden Doors. Important monuments in the posad (civil settlement) include several cubic churches of the 16th and 17th centuries, such as the Convent of the Deposition of the Holy Robe and the Refectory Church of the Assumption, and several monasteries. The most important of the latter is the Monastery of Our Saviour and St Euthymius, founded in 1352, with its 16th-century Cathedral of the Transfiguration built in the 12th-century tradition of Vladimir.

On the right bank of the Nerl River, at Kideksha, is the Church of St Boris and St Gleb. It is of great architectural importance, since it was the first church in Russia to be built in white limestone, the style that came to characterize above all else the 12th-century architecture of Vladimir. It is small (15.5 m x 15.5 m) with three apses on its eastern side. It is plain, with little decoration, though remains of medieval frescoes were revealed in 1947.

The architecture of Vladimir-Suzdal is characterized by stonework faced in regular blocks of white limestone, refined proportions, fine stone carving, apparent lightness of buildings, and the skill of the ancient church architects in harmonizing their buildings with the surrounding natural landscape. The monuments are unique in view of their age, authenticity of architectural form, and historic links with the founders of the Russian statehood, such as Yuriy Dolgorukiy (Yuriy Long Hands), Andrey Bogolubskiy (Andrey of Bogolubovo), Vsevolod Bolshoe Gnezdo (Vsevolod the Large Nest) and Georgiy Vsevolodovich.

Criterion (i): The White Monuments of Vladimir and Suzdal are outstanding examples of ancient Russian architecture. These white-stone structures are a unique phenomenon, incorporating the best work of creative master-minds and presenting an amazing synthesis of architecture and monumental art.

Criterion (ii): The white-stone architecture of Vladimir and Suzdal is an outstanding example of the development and perfection of architectural shapes and white-stone building techniques which formed a unique school of architecture. This influential style began and achieved its greatest expression here and illustrates a most important stage of human history and culture in the North-East Rus. Widely used as an example for subsequent construction throughout Russian history, they set a standard as a benchmark of architectural beauty and expressiveness of Russian ecclesiastical architecture.

Criterion (iv):The white-stone monuments and ensembles of the Vladimir and Suzdal school of architecture are outstanding examples of architectural art and perfect models of technical and construction skill, fully harmonized with the surrounding landscape. They exemplify the beginnings and the peak of the white-stone building style of the 12th-13th centuries, and are remarkable for a prominent harmony and perfection of architectural shapes.

The White Monuments of Vladimir and Suzdal incorporates all required attributes to reflect its Outstanding Universal Value. Taking into account the dispersion of monuments across the Vladimir Region, the integrity of each particular component of the World Heritage property is ensured by the established boundaries and protection zones. The status of the cultural heritage of the peoples of the Russian Federation of special interest guarantees the highest level of state protection of the sites and ensures their continued conservation and protection. The monuments are at risk from atmospheric and vehicle pollution which can affect their white stone facades, and of high rise developments in their immediate vicinity which can disrupt the historic townscape.

For several decades, the buildings of Vladimir and Suzdal were the object of considerable efforts to develop cultural tourism, with consequent restoration works to them, carried out with proper respect for traditional techniques and materials. The monastery monuments maintain the ancient Russian traditions and authentic architectural decoration techniques. All restoration works carried out on the monuments in various periods were intended to conserve the authentic structures, through the use of the old construction methods, techniques and construction materials such as white stone, white lime, oversized bricks, wood and metal. The monasteries conserved their historic plans and ensured the replacement of traditional planting.

Today, the monuments are in good condition. The museum manages the sites to ensure their conservation, monitors the conditions of the monuments and territories, and regulates the tourist services. The Uspenskiy (Assumption) cathedral is being used by the museum jointly with the Russian Orthodox Church, and the Church of the Intercession on the River Nerl in Vladimir is managed by the Russian Orthodox Church. The use of the monuments as the museum exhibits for ensuring their accessibility, coupled with their use by the church, enhances the authenticity and historic character of the buildings. As a result of recent restoration work, the white-stone walls and the white-stone carving of cathedrals are protected against atmospheric impacts. In order to preserve the wall paintings, climate control systems have been installed inside the cathedral. All works on the monuments for conservation and protection of white-stone structures, white-stone carving on the front walls, and monumental painting in the cathedral interior are accomplished according to the procedures approved by the Ministry of Culture of the Russian Federation.

A Management Plan is being developed. Buffer zones need to be developed for all the components of the property.